I seem to be in the minority here, so really there’s nothing here to see…carry on… 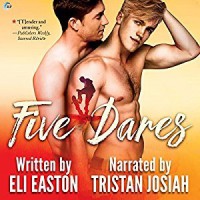 Andy and Jake have been friends…best friends for a long time and during that time The Andy & Jake show has kept their friends thoroughly entertained. Andy’s the daredevil. His stunts are daring, nerve wracking and at times downright scary. Jake’s the show’s promoter. He adds the drama and the flare with his dares, his pleading, cajoling whatever it takes to build anticipation of the pending event. Crazy stunts are nothing new for either of these young men…having them go awry is…or at least it was until the day Andy convinced Jake that they could safely hold lit firecrackers in their hands as long as they kept their hands open.

It could have gone so much worse than it did but still after a trip to the local emergency room resulting in a pronouncement of second degree burns on both of their hands, Andy and Jake find themselves having to revise their summer plans leading Andy to come up with the plan that they stay at his family’s summer cottage since they both need help with all of their basic ADLs (activities of daily living) and since Jake’s family doesn’t have the awesome health coverage that Andy’s does it only makes sense, right?

As the summer progresses Andy daredevil streak surfaces in the form of a dare between him and Jake…a dare that while it may bring some relief for the sexual tensions they’re each enduring it could also lead to potential heartbreak for one or maybe even both of them.

From a purely objective viewpoint this really was a cute, friends to lovers, new adult, coming out story. From a subjective viewpoint I could appreciate the writing and the story concept. What I didn’t seem to be able to do was connect with either the story or the characters. I liked the story well enough I just didn’t find myself enchanted with anyone.

I’m not going to sit here and attempt to pick this story apart and expound on all the things that I didn’t like or any of that rhetoric because truthfully, I wouldn’t know what to say. It’s not that this was a bad story or that there were things about it that I didn’t like. It’s just that for me it didn’t have ‘it’, whatever that ‘it’ is that endears a book to us and makes want to crawl inside and live in it…well that wasn’t there for me. There were times when I know things should have been funny or at least mildy amusing for me and they just weren’t.

So maybe this was a case of ‘it’s not you it’s me’ or maybe it was just a case of ‘the right book having the wrong reader or maybe that’s the wrong book with the right reader’. I can’t even say that it was a problem with the narrator because honestly, while the narrator, Tristan Josiah may be a new to me narrator. I thought he did an awesome job with this story. I really enjoyed the voices and looking at it from the perspective of the only the narration I’d have to give this one a solid 4 stars…so no matter how I look at it for me it comes down to the fact that this time around things just didn’t work…that’s it, that’s all.

Would I recommend this book…absolutely a lot of my friends really loved this one and I value their opinions a lot. Don’t get me wrong I value my opinion too but just like not everyone loves what I do…not everyone doesn’t love the same things as I do and there is the fact that overall, I really like Eli Easton’s writing and whether I love them or only like them…I’ve never been sorry that I read one of her stories…definitely a win in my eyes.

A copy of  ‘Five Dares’ was graciously provided by the publisher in exchange for an honest review.