Just a comment to explain why this one went down hill on me... 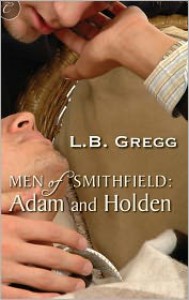 Ok so this is a really bizarre experience because I've listened to the first 3 books in this series and they were all narrated by Shannon Gunn and I enjoyed them so because I've read the books and this is just me listening to the audio books because I wanted to revisit a series that I had enjoyed years ago...until I got here and things kind of tanked a little for me.

Once again Shannon Gunn is the narrator and while I his idea of Adam's voice and the rest of the characters were ok, I can't lie Holden's voice...well...it was...let's just say it was not my idea of how Holden would sound and I might have found it a teensy bit annoying because truthfully for me it just didn't sound like a 40ish year old man but someone who was definitely older and at times the voice for me had a bit of a pervy undertone to it...sorry, but no...for me Holden's voice was just wrong and so for that reason and because he's one of the MCs the story can keep it's 4 stars but the audio only gets 3 stars from me.