This one had the makings of a really adorable story...older MCs, second chances, babies!!!! So much potential... 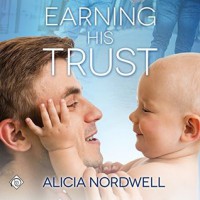 Evin is a single dad raising his son on his own...this wasn't the plan but you know what they say...life is what happens when we're busy making other plans.

When Evin finds himself at the local emergency room following an accident in the kitchen while baking the last thing he expects to encounter is the man who he once thought he'd spend his life with. A man whose just as surprised to see Evin sitting in the patients chair much less see him sitting there with a small child in tow. But when opportunity knocks...Ben's willing to answer the door.

Ben thought that ending things between him and Evin was the right thing to do after college their lives were heading in different directions he was sure it was the best solution for them both. What he didn't realize was that years later he'd still love Evin and want him in his life even if it was only as friends.

Ben quickly realizes that while he may want more what Evin truly needs is a friend and he's determined to step up and be that friend and if luck's on his side maybe he could win back Evin's trust and they'd get that happily ever after that he'd so carelessly thrown away.

I really liked that Ben was willing to be patient and to prove to Evin that a second chance was something that they both deserved and that Ben also recognized that Evin had some other issues that he needed to resolve before they could be together.

In general this was a sweet story but unfortunately it seemed to keep getting lost in the day to day details to the point that at times it just really distracted from the developing romance for me. I think if there had been a little more focus on Ben and Evin rebuilding their relationship had been added it would have gone a long way towards helping me to become more invested in Ben and Evin being reunited.

Mickey Hamm was the narrator for this story giving me 'a new to me author and narrator' to discover and while 'Earning His Trust' didn't work as well for me as I'd hoped it would I was comfortable with the author's writing style and am definitely think that there's potential for the future with this author and I definitely look forward to seeing what Mickey Hamm brings to the audio book format in future. I enjoyed the narration on this book and the narrator definitely added to this story in a positive manner for me.

'Earning His Trust' appears to be the Mickey Hamm's first audio book and he definitely ticked off my 'what I look for in a narrator' list and I'll be keeping this narrator on my 'watchlist'.

An audio book of 'Earning His Trust' was graciously provided by the publisher in exchange for an honest review.

short audioreviews new to me author and narrator