What was I thinking waiting so long to enjoy this series? 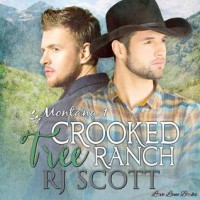 With his advertising career coming to an abrupt end, Jay finds that he suddenly needs a way to support not just himself but his sister and her two children.  The Crooked Tree Ranch needs saving. Nate's been running things since his mentor Marcus Allen became ill five years ago but if something doesn't give soon things are going to go from bad to worse.

When Jay first sees the add for someone to manage the business end of the dude ranch he's less than enthusiastic but the more he thinks about it, the more he begins to think this might be just the thing for him, his sister and her kids. A fresh start in a new place. What he wasn't looking for was a new man but Nate pushes all his buttons and resist as they might both men soon realize that there's an attraction that neither of them know how to fight, but neither are they sure that they want anything either. So maybe friends with benefits?

'Crooked Tree Ranch' is the beginning of this series and along with giving Jay and Nate's story we're given the a whole lot of secondary characters and background as well as an overall story line that will thread it's way through the series...it's a bit of a thriller mystery that this series will continue to build on.

Sean Crisden has once again added depth and uniqueness to the voices in this audiobook making this story all the more enjoyable for me as I was drawn into events by his easy cowboy drawl and needless to say I'm more than ready to get into the next book in this series. I really don't know why I've waited so long to get into this series but I'm glad I haven't waited any longer.