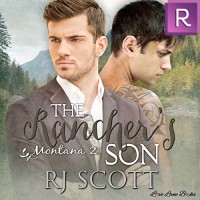 In 'Crooked Tree Ranch' we met Nate and Jay along with their friends and families and there was a whole lot of background about the Crooked Tree Rance that we were given and if you hope to read this without being lost you need to read that book first because in 'The Rancher's Son' we find out more about the storyline that threads from story to story in this series. In the first story we learned that the Crooked Tree Ranch was owned by 3 families...friends wanting to build a legacy for their children. But 2 of those children are missing...disappearing without a clue where, why or what had happened to them.

In the first book we met the Todd Brothers...Nate and his brother's Gabe and Luke the baby...well, not really but he is the youngest. We also learned a bit about the other two families...the Allens, Marcus is their dad and then there's Ethan the oldest son who became a cop and never gave up looking for his missing brother Justin. But when Ethan follows a lead that takes him to a hospital in Chicago it's not his brother that he finds but Adam the friend who disappeared with Justin all those years ago.

Ethan's torn because of course he's ecstatic to have found their missing friend and the young man that he'd confessed his love to all those years ago but he's no closer to finding Justin because Adam's lost his memory and he has nothing to offer when it comes to information about what happened to him or even who he really is.

The Rancher's Son was narrated by Sean Crisden and once again I slipped into this story with ease and comfort as I listened to Ethan and Adam fall in love all over again and they struggled with the past and the bits and pieces of it that slowly begin to creep back into Adam's mind answering questions and leaving even more in their wake and leaving everyone wondering what's happened to Justin is he dead as his father fears or is he out there somewhere needing his family to find him as Ethan believes?

I am so ready for the next book in this series and thankfully it's out on audio so I'm off to get my Crooked Tree Ranch fix and see if I can find out what happened to Adam and Justin all those years ago? How did they get separated? and where is Justin now? Is he still alive? Questions so many questions and hopefully I'll find at least some of those answers in 'A Cowboy's Home'.