It seems I've become a sucker for men with tats... 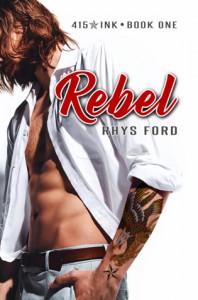 '415 Ink.' is the newest series by Rhys Ford and you can be damned sure that I was going to read this. Unfortunately lifes been handing out sucker punches for me lately so it took me a little longer than intended to get to this one...so, my apologies to the author for that. But I'm here now and damn am I glad I finally made it to this party.

Gus Scott has been on the road trying to escape the demons of his past and find some inner peace until an unexpected phone call makes him pause and take a look at himself only to realize that in spite of his reluctance...it's time to go home and become a parent to the son he never knew he had.

Rey Montenegro has known since the day he first saw Gus that he wanted him. For Rey...Gus but try as they might when they finally got together in spite of the fire of their passion Rey finally realized that what he wanted and what Gus wanted weren't the same things and ultimately they were both left heart broken when Rey ended things.

When Gus returns home determined to become the dad his son needs and take his place at 415 Ink. the family run tattoo shop things start to unravel when he comes face to face with Rey but it's also Rey who's there and becomes a constant in his life and giving him strength, support and a shoulder to lean on.

'Rebel' is the beginning of a series that this author has once again filled with characters that I want more of...Gus and Rey are just the tip of the iceberg on this one. Gus has two families the one that he was given and no longer has but still a family that has marked his soul and left him broken and then there's the family that he's created, the family of brothers who have loved him and held him together over the years...there's Bear the oldest and father figure, Luke the peace keeper, Mace who grates on Gus but believes in him the most and will fight for him without hesitation and Ivo the only one who is Gus's brother both by birth and by choice. Along with these characters we've been given glimpses of others who may or may not play a role in future stories and I'm sure will add interest to other stories as the series progresses.

As well as a cast of awesome new characters to discover one of my favorite things about Rhys Ford books is that if you're paying attention you get surprise visits and this story was no exception I mean it's partially set in a tattoo parlor so of course Ichi showed up and I'm pretty sure there was someone there from the Sinners series getting a bit of ink as well...but you'll have to read the story to find out who.

'Rebel' is so much more than a second chance story. Of course it's about finding love but it's also about learning to forgive yourself and accept that wanting something good in your life and reaching for it can be worth the risk to your heart. It's about starting over and building the life you deserve which maybe isn't the life you thought you wanted. I loved how Rey and Gus worked together there was just something about them as  couple that worked and made me a fan of these men and this series. I'm so looking forward to reading the next  book in this series whatever comes next I know we'll at least get a peek at how Gus and Rey are doing and yet another awesome story.

Also before I scoot off to the next task...can we just take a minute to admire this cover...I mean seriously...that hint of tats on his arms and while it's not a clear face view...Yeah!!! no headless torso!!!! and yummy...just yummy!!! I may not factor covers into my rating for a book but it doesn't mean I don't admire them when I see one that I like and this one...well...me likey!!!

An ARC of 'Rebel' was graciously provided by the publisher in exchange for an honest review.