As much as I liked the first book this one was just as good...maybe, a tiny bit better... 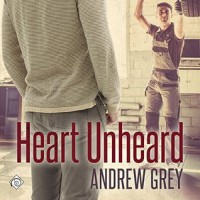 Brent Berkheimer and Scott Spearman have been flirting with each other for a while now and it's not gone unnoticed by more than a few people but Brent's determined not to act on his feelings because it just wouldn't be fair...he's Scott's boss, he's a lot older...so as far as Brent's concerned when it comes to Scott...the man is strictly hands off.

Scott's tried...he's flirted and done is best to let Brent know that he's definitely interested in more than an employer/employee relationship but so far it's gotten him nowhere.

When a hit and run accident leaves Scott seriously injured Brent's forced to re-evaluate what's truly important to him making him realize that what's truly important to him is lying in a hospital bed and Brent decides that he's done denying what matters the most and while it may be too late for him and Scott, he's still going to be there for him...even if it's only as a friend, if that's what Scott wants and needs then that's what Brent's going to be for him.

There's more to Scott's accident than it seems at first and Brent's got his own demons to battle if he wants to be the man that he thinks Scott deserves. It's not all smooth sailing as Scott has to learn how to live without his hearing and in spite of how strong and dependable Brent's been Scott's got his doubts about how long Brent will stay around if he doesn't get his hearing back and Brent's battling his own self-doubts about whether or not he can be what Scott needs leaving both men felling insecure about whether or not they can last no matter how much they want each other. It's going to take some tough love from their family and friends to make then each see that the heart wants what the heart wants and it's just going to take a leap of faith for them to be together.

I loved Brent and Scott and seeing them finally give in to their feelings for each other as they worked through finding ways to communicate with each other now that Scott can't hear. Getting to know each other and understand each other isn't an easy task when being able to talk and hear what the other is saying gets removed from the equation.

I loved that Brent didn't try to just step in and do things for Scott, instead he encouraged Scott to speak up for himself and keep his independence and if he needed to he stood up for Scott's right to retain his independence even going to far as to bring in friends who understood what Scott was going through...that's right  he brought in the big guns and we got to see Trevor and James...no, neither of these men are deaf but James knows what it's like to suddenly loose one of his senses. James lost his sight when he was about 12 years old and he remembers what it's like to be able to see and then lose his sight...he knows what it's like to have something and then lose it, to grieve for the loss and James also knows that sometimes as a friend you have to end the pity party and hand out some tough love if you really want to help the people you care about.

Scott's parents added an interesting dynamic to this story for me. As a parent while I could understand his mother's desire to shelter and protect him, I was equally as frustrated by the fact that she viewed his decision to learn sign language and get on with his life as a deaf person as giving up because the doctors didn't know for sure that the deafness was permanent, whereas I viewed it as Scott dealing with what was and what he was given to deal with. I would have been far more bothered by things if Scott had decided he was going to do nothing and wait to see if his hearing came back...seriously? How long should he wait and what was he giving up on? For me he was choosing not to waste his time waiting for something that might never happen when at worst if he got his hearing back while he was learning sign language, he'd still have another skill that he could always use. Thankfully Scott had a support system in his friends who saw this as being  a positive choice on Scott's part.

I'm not sure what's coming next in this series but I'm really looking forward to finding out. So far the stories have really worked for me, giving me characters and stories that wrap themselves around my heart and make me smile at the strength of the characters I'm introduced to.

An audio book of 'Heart Unheard' was graciously provided by the publisher in exchange for an honest review.