Can two broken souls create one happily ever after? They can when they’re strong enough to take another chance. 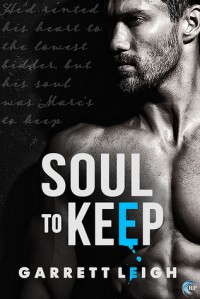 ‘Soul to Keep’ is the second book in Garrett Leigh’s series ‘Rented Hearts’ the book that introduced first introduced us to Jamie Yorke…former rentboy and recovering drug addict.  Zac’s friend who we last saw in California where Liam, the other MC from ‘Rented Heart’ who helped Jamie get to California for his rehab.

In ‘Soul to Keep’ we catch up with Jamie as he’s returning to England. He’s been clean for a year and while California is warm and sunny for this Brit it’s just not home and Jamie needs to go home.

When Jamie’s nervousness gets the better of him on the flight home, Marc’s need to nurture and fix things takes over and he helps Jamie to overcome his nervousness. Once the plane lands both men go their separate ways and while neither really man really forgets the other they both have their own lives to get back to and are equally surprise a couple of weeks later when their paths cross yet again when they discover that they are living just minutes from each other.

I really loved this story for me it clicked. While the attraction happened fairly quickly and was easily felt between these two men that didn’t mean that the relationship was instantaneous. For as much as they felt their attraction to each other both men were also hesitant to enter into a relationship because of their own personal demons.

As well as his addiction issues, Jamie is caught up in the grip of OCD and his self esteem is low, to say the least, but he soon finds that being around Marc gives him a sense of peace and grounds him as few if any other things do, so while he kept running from Marc when things got to intense he also kept coming back. Jamie’s convince that the other shoes going to drop and Marc’s going to send him away but until that happens he’s not going to leave permanently.

Marc’s convinced that Jamie’s going to cut and run once he’s had enough of being with a man who’s only got one leg. He’s so conscious of his injury unlike Jamie who sees beyond Marc’s injury to the man and the goodness he contains. To Jamie…Marc is strong, handsome and sexy and so much more than he could ever possibly deserve.

But Marc sees Jamie in such a different light. He sees someone who’s fought in a different type of war and he wants to help Jamie feel good about himself to learn to control the things that are controlling him…he’s a doctor it’s his nature to want o fix things but Jamie’s gotten under his skin in a way that goes beyond simple doctor/patient relationships. He’s coming to care very deeply for the beautiful, damaged young man.

I admit I’m totally a sucker for second chance stories, stories about people who life has repeatedly sucker punched but who have just as repeatedly pulled themselves back up only to keep going, keep trying moving towards their goal of becoming the person they want to be…someone better and stronger than who they were…someone they can be proud of…someone who deserves love and happiness as much an anyone else in this world and that’s what Garrett Leigh writes  and writes so incredibly well are stories like this. Stories that remind us that the human spirit is strong and indomitable that giving up should never be a part of anyone’s vocabulary and that everyone is worthy of a second chance at both life and love.

Garrett Leigh is quickly becoming a favorite for me. Without fail I have loved everything that I’ve read by this author so far and while I haven’t read everything that she’s written I’m working on it.

An ARC of ‘Soul to Keep’ was graciously provided by the publisher in exchange for an honest review.