And this time the journey is being made on the ocean... 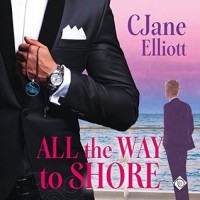 That's right I'm still traveling and so are the MCs in my audiobooks...

This time I'm going on a cruise with Jonathan Vallen and Marco Pellegrini as each man attempts to get a break from the life they lead and maybe find a little romance along the way only to discover that the love and romance they were looking for was right there in their life all along if they were brave enough to reach out and grab it...sometime you don't need to look any further than your own back yard to find what you want.

Jonathan gave up what he truly wanted from life when he thought that it would earn him the approval of the one person who he was certain he could never please...his father. When Jonathan's father told him it was time to step up and learn how to run the family business...Jonathan did it without hesitation...his father needed him of course he wouldn't let him down. Unfortunately life just isn't that simple and when Jonathan's father brings in Marco Pellegrini to 'train' Jonathan...well, that's when Jonathan decides to exit, stage right. Clearing the way for Marco to turn things around at Vallen Industries. While Jonathan does the same with his personal life.

It's one year later and neither man is fully satisfied with where his life has gone so Jonathan grabs his good friend and cousin Anthony and heads out for the Caribbean on an LGBTQ cruise not knowing that one Marco Pellegrini and his sister are about to do the same. Jonathan's changed so much in the past year that Marco literally doesn't recognize him, but that doesn't stop him from liking and wanting the man he sees either and a shipboard romance begins.

I really enjoyed how Jonathan and Marco's relationship developed. They spent time together actually doing things...that didn't involve begin naked...not that this didn't happen, but the relationship between these two was built slowly with time and while Jonathan was the driving voice behind events as they happened we got to know Marco through his journal entries making for a slightly unusual reading/listening experience but definitely one that I enjoyed.

Jonathan and Marco made for a really adorable couple and while the disagreement that saw them separated for part of the book was inevitable I liked the resolute that brought them back together it was sweet...the kind of sweet that leaves you smiling and sighing in happiness. So overall this was  fun story to listen to and surprisingly this was my first CJane Elliott story and my first time listening to a book narrated by Tim McKiernan but I'm pretty sure it's not going to be my last time for this author or this narrator. Together they gave me a really enjoyable listening experience and I'm looking forward to finding out what more they have to offer both separately and as an author/narrator pairing in the future.

The icing on the cake for this one aside from a pair of well matched MCs were the supporting characters...Jonathan's cousin, Anthony was adorable and I really liked him. He was a good and loyal friend to Jonathan and honestly, I'd be more than happy to read a book or even a story about him getting how own HEA and then there was Marco's sister Sophia...I don't read much outside of the m/m realm these days but i think for Sophia, I could be persuaded to make an exception and Jonathan's father...well, every story needs a villain, right? The guy as a total and absolute douche and he just didn't deserve to have Jonathan for a son...that's all.

'All the Way to Shore' is the first book in this authors series 'Stories from the Shore' and I'm definitely looking forward to seeing what comes next..so sign me up for the cruise...anyone care to join me?

An audio book of 'All the Way to Shore' was graciously provided by the publisher in exchange for an honest review.