Let's talk about the audio... 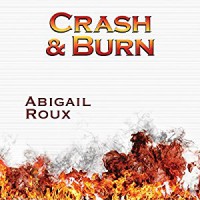 So recently I found myself having to spend some times...ok, a lot of time off of my feet as the result of a fall that left me with an injured knee...so what better use of times was there than books and so I indulged both in e-books and audio books but for now we're going to focus on the audio books and specifically the Abigail Roux's 'Cut & Run' series...so here's what I'm going to do because this series consist of 9 books narrated by 3 different narrators...so first things first...this is truthfully one of my least favorite things. This series consist of the same MCs from start to finish and I won't lie my preference in a situation like this it to have the same narrator from start to finish. Which makes this a case of 'I really loved the stories'. So I'm going to break things down by narrator and talk more about that than the stories because this series has been around for quite a while and between the reviews that are out there and the book blurbs I can cheat and save myself the time and typing...so here we go...

Books 1 & 2 (Cut & Run, Sticks & Stones) are both narrated by Sawyer Allerde. Ok, let's start here at the beginning...first thing none of these people are bad narrators as far as I'm concerned. I've listened to one other book narrated by Sawyer Allerde aside from  these two books and that was the first book in Josh Lanyon's 'All's Fair' series and I really enjoyed that one. However, this time around things didn't go quite as well and there were times when I felt like the narrator was racing to get through the book which tends to spoil things for me.

When I'm listening to an audio book I like to feel that the narrator enjoys reading the story as much as I enjoy listening to it. So from a listening stand point books 1 & 2 were not my favorites, however, things were not so bad that my enjoyment of the story was spoiled by any means...what can I say it takes a lot to spoil Ty & Zane for me...A LOT!!! And this was not it. So for the narration on these two books I would probably say things sat in the 3.5 to 4 star range.

Books  3, 4 & 5 (Fish & Chips, Divide & Conquer, Armed & Dangerous) are all narrated by Sean Crisden. Now I have to admit I am no stranger to the narrations of Sean Crisden, I've listened to approximately 20 books narrated by this particular person and some of them more than once...so in case you're still wondering yes, I really like Sean Crisden and I very much enjoyed these next 3 books but and I have to admit this still strikes me as being a bit unusual things just weren't quite right for me. I have no distinct issues here and can only say that for whatever reason while I enjoyed listening to Mr. Crisden's narrations he just wasn't Ty and Zane for me...so, good performance but not the connection I'd thought I'm make with things.

and books 6, 7, 8 & 9 are all narrated by J. F. Harding. Again this is not a new to me narrator as J.F. Harding was the narrator for the 2nd & 3rd books in Josh Lanyon's series 'All's Fair' another series that I very much enjoyed but that for me would have been so, so much better had there only been one narrator for all 3 books. But on the upside these last 4 books were definitely the most enjoyable of the bunch as I found that J. F. Harding's narrations for the C&R books was the one that I related to the best.

Also, I think what made this all more palatable was the fact that the switches in narrator didn't jump all over the place and it was done with clean breaks. Book 1 & 2 were narrated by the same person and then it switches to someone else for 3 consecutive books and the final 4 were also the same narrator. Had the narrators been allover the map and by this I mean Narrator 'A' did books 1 & 6, while Narrator 'B' did books 2, 5 & 9 leaving narrator 'C' to pick up 3, 4, 7 & 8 I probably wouldn't have been able to stand things no matter how good any of these narrators are.

Ok that's my ramble on the importance of consistency in narrators and while I probably should have reflected this in my rating rather than just give all of the books 5 stars. I just didn't have the heart. I ploughed through these books in barely a week so as much as I would have been over the moon to have the same narrator for all of the stories...I can't say that I was deterred by not having that or that it even slowed me down...sometimes as much as we would like something to be a certain way it doesn't mean it has to be...just that this is how we'd like it to be in an ideal world.

I will also freely admit that there is a mainstream series that I would give just about anything to listen to on audio if it wasn't for the fact that there are 7 books/novellas in this series and no fewer than 5 narrators and yes, they are all over the board...limits, I has 'em and this series definitely hits them...so, I'll just carry on reading this one the old fashioned way and making sad faces over the lack of consistency that went into this series and how sad that makes me...