Like a true nature's child We were born, born to be wild... 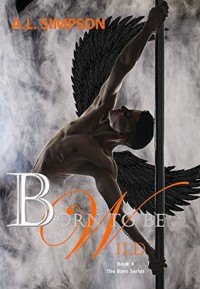 'Born to be Wild' is the fourth book in A.L. Simpson's 'Born' series and I have to admit I was hesitant to read this one because it's part of a series and I haven't read the first 3 books, but the blurb said it could be read as a standalone and since it intrigued me, I decided to take a chance and truthfully I'm still torn as to whether or not that was a good idea because technically yes, I was ok with reading this one without benefit of having read the previous books. I followed the story and I was given enough of the backstory to avoid being confused but I'm also left feeling that if I'd read the previous stories I would have very probably enjoyed this one a bit more.

The good here and there was definitely good...was that I liked the story premise as I said it was intriguing. I really liked the characters in this book and not just Liam and Jake. There was a considerable number of secondary characters who I think have the potential for their own stories...Jake's brother Roan, his best friend with benefits Angus, Tommy who works at The Velvet Post, the club Jake and Roan own as well as Pedro and Chris, Joey, Trace and on and on. You see the employees of The Velvet Post are like family and they take care of each other.

'The Velvet Post' is the gay strip club that Liam ultimately ends up working at after he leaves home at the age of 17.  When Jake and Liam meet by accident one morning both men feel an instant connection, although neither of them is willing to admit it. But as a result Jake offers the young man a job dancing for his club but not until he turns 18, which is in a few months. Until then he's going to do the books for Jake and Roan and learn his dance routines.

Liam's time as a street kid really isn't that long and I have to say he's pretty fortunate shortly after he leaves home he's taken in by a nice Asian lady and he works at her restaurant waiting tables while going back to school to learn accounting...and the lovely Asian lady is paying for this. When Liam's brother Steve (whom I would have met and known much about if I'd read book #3) finally finds him, Liam convinces Steve to keep his whereabouts secret and go back home and as soon as Steve's gone Liam packs up and skips town. He's not ready to see his family again and he doesn't trust Steven to not give away his where abouts or to stay away from him and he's too ridden with guilt to deal with family and this is how he comes to end up staying in a hotel across the road from 'The Velvet Post' where he meets the 26 year old Jake and begins to find a way to deal with events of the past.

I totally love second chance stories and while Jake was having a hairy conniption over the age difference of 9 years I have to admit under a lot of circumstances I would have totally blown it off and told the man to get over himself and grab a little happiness...but, screwed-up 17 year old  with an established, successful 26 year old and honestly...I'm with Jake...bad idea. Fortunately there was a bit of restraint shown in that Jake's plan was for him and Liam to date and get to know one another until Liam's 18th birthday...well, we all know what road's paved with good intentions don't we?

Anyways, I really don't want to go into more detail about the story at this point. So suffice it to say this was for the most part where my rating of the book started to slip since it really wasn't the actual age gap that I had a problem with but 'the age' of the MCs. Had Liam been say 20 and Jake 29 I would have been a bit more comfortable with things or if Jake had maybe decided to keep things on a more platonic level until Liam turned 20...but things were what they were and the fact that in some ways Liam was mature for his age, but in other ways...maybe not so much and thankfully most of all I never felt at any time about anything that Liam was being forced or coerced in any way so this for me was a bigga, bigga plus for this story.

At the end of things rating 'Born to be Wild' turned out to be a bit of a tennis match for me, I went back and forth on what was good and what didn't work for me with my two biggest issues being that I do wish that I'd read the previous books before this one as I truly feel that it would have helped me make that connection with the story that I get when I really enjoy what I'm reading and I wish Liam's age had been even just a couple of years old when he and Jake met...19 about to turn 20 would have worked so much better for me and I'm more than willing to put that down to the mom in me. So I guess it's a 50/50 split on the how's and whys of this one not going better for me...who knows maybe one day I'll track down those first 3 books and re-do this reading adventure at least then I'll know for sure how much difference it would have made for me, but in the mean time if you've read the first 3 books in this series you're probably going to enjoy this one and if you haven't than I'll just add that the reason I didn't think that any of Liam's connections needed a story of their own is because they already have them...the first book is about Liam's parents, the second book is about Wade and his partner Rafe who Jake consider to be his uncles and the third book is about Steve and his wife Keegan and I believe it also contains a lead in to Liam's story. So even though 'Born to be Wild' can technically work as a standalone story...I think that ultimately the choice is up to you...the reader.

A copy of 'Born to be Wild' was graciously provided by the author in exchange for an honest review.