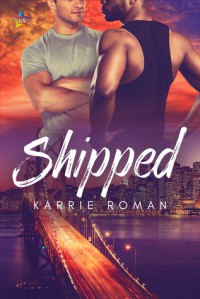 And for more than one reason. I was presented with the opportunity to read 'Sentinel' the second book in this series and when I was checking things out because...hey what can I say...this is a new to me author and I wanted to be sure or at least as sure as I could that this was a book that I would hopefully at least like. Anyways, somewhere along the line in my poking around I came to the conclusion that I needed to read the first book and fairly quickly I came to the conclusion that I needed to read 'Shipped' which is the first book before jumping into 'Sentinel' and for a number of reasons I was right. I honestly can't say I'd recommend reading book 2 if you haven't read this book first.

I definitely enjoyed 'Shipped' and when you get into 'Sentinel' you quickly realize that by reading this book as well you are far more familiar with all of the players and their background info than if  you'd skipped it...which for me makes the story much more enjoyable.

Lucas Evers is an established actor who's already earned a certain level of success for himself while Ryan Lowe is new to the acting scene and anxious to make a name for himself both men really are very likable and there's chemistry from the word go with them but it's not a simple case of boy meets boy, boy falls in love with boy and they all live happily ever after...no, Lucas has a wife but sometimes things are exactly as they seem, there's also the matter of Lucas's family...and don't they just put the fun back in dys-fun-ctional.  Plus there's the whole issue of Ryan isn't even sure whether Lucas is straight? gay? or at last bi?

While Ryan's live may seem a little simpler with being estranged from his father, who is also his only family an no love interest in sight...you would thing things would go a little smoother for him...but no, even Ryan has his trials and tribulations and his own personal stalker and as Ryan and Lucas's popularity increase...one of them becomes a target while the other is helpless in the grip of fear and panic.

When Ryan gets cast as Lucas's love interest  both men are determined to keep the romance on screen and confine their relationship to something strictly platonic but when their fans and their hearts have other plans what they want and what they get become two different things and fans are more than willing to switch from shipping the couple as  'SamDom'  to 'Lovers', yeah it was a little cheesie that their last names could be shipped to 'lovers' but hey, I've read way worse so it's all good in my world.

For the most part not only did I really like Ryan and Lucas but there were a lot of secondary characters that I liked as well. I loved 'Anna, Lucas's 'wife' and for more about that...you know the drill...read the story. I think you'll end up liking her a lot as well. She's pretty awesome and while there wasn't a lot of attention place on it...it was clear that Anna was a 'plus size' woman!!!! There aren't enough characters in fiction who are plus size and portrayed as being comfortable with themselves and we need them in real life and in fiction...it's not ok to shame people because of their religion, gender, sexual orientation or so many other things but fat-shaming...people that's not ok either and it's when I come across something like this that I feel good because I think..."Hey, maybe...just maybe the world is catching on...truly catching on. We're all different and that's what makes us all special and unique. I'd rather be healthy, happy and 40 pounds overweight than someone who's insecure and ruining their body with bizarre yo, yo diets  in an effort to become the media image of perfection."

So stepping off of my pulpit let's get  back to this story and the fact that there as well as the main characters there are some secondary characters that I really liked and this is the part that ties into the next book because...you guessed it a couple of those characters are the MCs in the next book. Not to mention that several of the characters in this book will reappear at one time or another so as well as being a genuinely enjoyable story there's background for the 'Sentinel' in this one that helps to make the next one equally as enjoyable.

"Shipped" offered a solid and enjoyable start to a new series by a new to me author and I'm looking forward to seeing where the next installment in this series takes me.