It's a bit of Murder and Mayham... 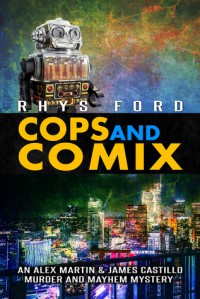 'Cops and Comix' is a short story taken from Rhys Ford's world of 'Murder and Mayham' but what it's not about is Rook and Dante. This is a story about Rook's cousin Alex Martin and how he and homicide officer James Castillo came to be a couple and can I just say 'I love Rook and Dante' but these two have popped up in both of the 'Murder and Mayham' books...especially in the 'Tramps and Thieves' and I knew for sure that I wanted to know more about this pairing...they're adorable.

It seems that as well as being cousins...well being cousins and apparently a weakness for men in uniform, Rook and Alex have something else in common and it's a bit more lethal because it's murder...that's right both of these seem to attract murder and that's how Alex ends up on James's radar.

James knows as soon as he sees Alex that he wants to know him better...on a more personal level but there's a murder that needs to be solved first and once that's done...look out Alex because James is a man who knows what he wants.

There was only one thing about this story that bothered me and that was the fact that the more I read the more I liked and for me it just all ended too soon and I really would love more Alex and James. I think these two are every bit as adorable as Rook and Dante but in a very different way and if there's a book in the offing for them I want it...yes, I'm making grabby hands just in case.

Unsurprisingly the one thing I can say for sure is that if Rhys Ford writes it...I want to read it.

An ARC of 'Cops and Comix' was graciously provided by the publisher in exchange for an honest review.