Re-release or original this one's worth reading... 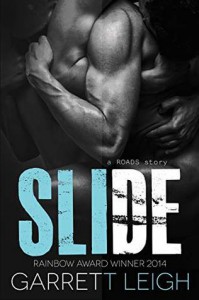 ‘Slide’ is by no means my first Garrett Leigh book and as with previous reads this one has captured my attention from start to finish and I have loved every word of it and since this is a re-release I’ve also loved that I’ve been able to jump into the next book as soon as I was finished with this one and then directly into the last book…right after that but we’ll talk about those books when I get to their review for now lets talk about ‘Slide’.

Ash Fagin is an incredibly talented artist with an incredibly troubled past. Years of neglect and abuse in the foster care system and on the streets have resulted in a history of drug abuse have taken their toll leaving him more than a little troubled but when he looks at Chicago Paramedic Pete, Ash sees everything he’s never known or realized that he wanted and together they begin to build a life that offers both of them love and happiness.

Things seem to be working out for Ash and Pete until the nightmares of Ash’s past meet up with their present and events at work have Pete so distracted that he fails to see what’s happening to the man he loves until circumstances are dire and Pete realizes that even if he can save Ash…he may still be too late to save them.

It’s hard sometimes to explain exactly why one author has a stronger, more deeply felt impact on me than another one who may be just as good but for whatever reason doesn’t seem to make that same connection but without fail Garrett Leigh’s stories carry that connection for me.

I loved Pete and he proved to be exactly what Ash needed, but Ash won my heart in a totally different way. He brought out the momma-bear in me. I wanted to wrap him up in a blanket and feed him milk and cookies, tell him what an amazing, talented and wonderful person he was. For me Ash represents every child that the foster care system and society in general has ever failed…yep, insert tears here.

‘Slide’ isn’t a story that starts at the beginning but more in the middle and as the story progresses things flow backwards and forwards in time and while it seems that this would possibly make for a confusing story what happens is that the reader gets pieces as they become relevant giving clarity to circumstances happening in the present.

I loved that we are given events from both Pete and Ash’s perspective allowing the reader a chance to know both men and see their world through both of their eyes and adding balance to events.

In ‘Slide’ we get to see Ash and Pete go from strangers to roommates to friends to lovers. We see them struggle to keep a fragile new relationship growing and then watch as it grows and becomes stronger withstanding the nightmares that haunt Ash as his past catches up to him.

While I very much enjoyed this story, I can’t say that I liked everything that was said or done by any one character but that’s pretty much how life goes in the real world. None of us say or do things that everyone likes all the time, none of us are the person that everyone likes all the time and maybe that’s part of why I connected so well with this story. This isn’t a story about perfect people doing perfect things all the time. They’re flawed people and sometimes they don’t try to be the best person they can be…sometimes, they’re just trying to get by and survive and maybe that’s not how it should be but like the rest of us these characters aren’t perfect people living in a perfect world. They’re just people trying to get by and survive.

for “Marked” and “Air”. “Marked” is a short story that was previously released by the author as a freebie and has now been included in the re-release of this book. I enjoyed this little slice of life with Ash and Pete as they get up close and personal following a tattoo session that’s mentioned in ‘Slide’ where Ash fixes a tattoo that Pete’s had done years earlier. While reading or not reading ‘Marked’ isn’t going to affect the readers’ enjoyment of the series it is still a nice sexy slice of life that I quite enjoyed and definitely recommend for fans of Ash and Pete.

A copy of ‘Slide’ was graciously provided by ‘Signal Boost Promotions’ in exchange for an honest review.