And the re-release continues... 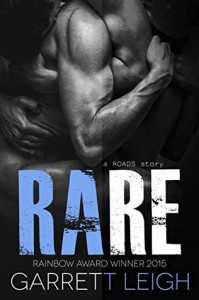 ‘Rare’ is the continuation of Ash and Pete’s story and with this installment we not only get to see how much Ash has come back from the events of ‘Slide’ but this time around it’s Ash’s turn to step up when Pete is the one in need of the extra love and support and for Ash it’s going to mean more than just being there for Pete. Once again Ash’s past comes knocking on his door only this time Ash’s priority is Pete and dealing with his past needs to take a back seat to what he feels Pete needs from him. So, while his past is still demanding his attention and there’s closure to be had for Ash it’s going to take a backseat to what’s happening in the present.

I know a lot of my friends found this one to be really emotional and it was, but I also felt that there was a positive undertone. Ash and Pete may have their struggles in the face of adversity but ultimately, they hold firm to their love and faith in each other.

Like so may people Ash is his own worst critic and this can be a way to challenge themselves to always do their best and try harder for some people because of his past at times Ash’s lack of self esteem can be debilitating but when Pete needs him the most is when we are shown how truly strong Ash can be.

I loved this role reversal. Seeing not only that Ash has the strength that Pete has always seen in him but that when it comes to the man he loves Ash is truly an equal partner. While there are challenges and conflicts at the end of them all neither man ever looses sight of what they have and how much it means to each of them.

I also loved that while Ash stepped up to be the man he needed to be it never felt easy. He had to dig down deep to find the strength not only to be there for Pete but to deal with the part of his past that came knocking on his door wanting into his life. This was such an integral part of the story and how Ash dealt with things was not only going to impact his life but that of Pete and their friends.  While I loved the whole story, this part was, for me, so well handled. There wasn’t a magic solution at hand but a solution that was basically a work in progress throughout the story.

I was frequently left with that feeling of one step forward and two steps back that we all experience when we’re dealing with the bigger issues that can come up in our lives giving this story a very solid feeling of being grounded in reality despite some of the coincidences that at times were a bit much.

Finally, as much as I enjoy Ash and Pete, as a couple, having them interact with their friends and family simply added to their depth as characters and helped to keep that grounded in reality feeling that it had while reading this series.

There’s a lot of change happening throughout this story…things are constantly changing for Ash and Pete as both as a couple and as individuals while they work through life’s challenges, but as with any relationship change will happen. So really, it’s not surprising that Ash and Pete aren’t the only ones experiencing change…the changes happening are with and between Ash, Pete, their friends, family and careers.

‘Rare’ isn’t the end of the journey for these two men and can’t wait to find out what comes next in the third and final installment of Ash and Pete’s story. I have no doubt that it will involve change.

A copy of ‘Rare’ was graciously provided by ‘Signal Boost Promotions’ in exchange for an honest review.