Sometimes loosing everything isn't the end of your life... 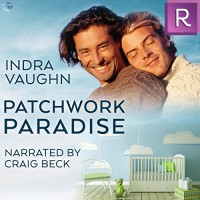 It's just the beginning of a new one.

Oliver and Samuel have it all. Their's is a fairytale existence...until it isn't. It can take a lifetime to find love and a moment to loose it. No one knows this better than Oliver.

'Patchwork Paradise' is the story of one man's struggle to survive the tragedy of loosing the man he loves and rebuilding his life only to discover that while he's lost one love there's another one waiting for him...not to replace what's gone because nothing could ever do that. This love is there waiting to fill it's own place in his heart.

I've had this one in my audio library for a while now and when I came across it the other day I decided that it was time so I grabbed my handy box of tissues and hit the play button and barely 30 minutes into the story tissue in hand dabbing at the tears in my eyes...I questioned my sanity and kept right on listening because this isn't a story about loss it's a story about surviving it, about moving forward and about paying tribute to the person you've lost by going on and making a new life for yourself. One that's filled with love, laughter and hope.

That's what Ollie (Oliver) did of course he mourned the loss of Sam and rightfully so. Sam was his forever love but unfortunately as we all know life's not fair and nothing ever last forever...but, Sam was the person who taught Ollie how to love so a part of him will live forever. Every step that Ollie takes towards rebuilding his life, every time he puts his heart out there it's because Sam's love showed him that he was worth it, he deserved it and in his heart Ollie knew that the last thing Sam wanted was for his life to end with Sam's.

I seriously thought Sam was awesome even though we didn't get a lot of time with him. I think the magnitude of what a wonderful man he was came through because of Ollie. It was his memory of Ollie and how much Sam loved him that gave Ollie the strength to keep trying...to remember even after they're gone how much someone loves us is a pretty powerful indicator of what we meant to them and to be able to open your heart up to the possibility of finding love again shows just how positive that love was.

There were some surprising things that happened in this story that for me made it all the more interesting and even though I'm pretty late to the party on this one I'm not going to delve into them to deeply because I'm just guessing that maybe I'm not the only one who hasn't read/listened to this book yet.

While Sam and Oliver started out as the MCs in the story there was also a core group of friends who were integral to the story and certain events in particular. Within the boundaries of Sam and Ollie's group of friends we have Ollie's best friend (Cloe), Cloe's boyfriend (Imre) and Thomas (Ollie's friend from work and the man who's quietly loved him for years). There's also Sam''s parents and that'll be enough about them and then there's Ollie's mother (most adorable grandma so far this year).

While this was only my second time with a book by the author Indra Vaughn. It's the my fourth time around with the narrator Craig Beck and once again this narrator has done an exceptional job of giving this story added depth and breathing life and emotion into the characters leaving me confident that when I see his name listed as the narrator I'm not going to be disappointed with what I hear.

"Patchwork Paradise' is a story of pain, lose, friends, family, comfort, healing, second chances, starting over, strength & courage, finding love, having hope...it's about life...the one we have, the one's we lose and all the things in between that touch them.