If you liked the book... 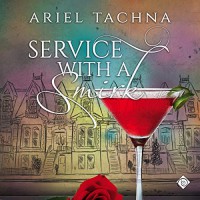 Than why not check out the audio...it seems to be a thing with me. I find that while I'm rarely a fan of re-reading a book because nothing ever changes and for the most part I tend to get bored unless a book is like really, really amazing for me and yet somehow when it's on audio I don't have that issue. I've got some audio books that I've listened to 3, 4 even 5 times and no, nothing ever changes, i know what's going to happen and yet I love listening to them as much the third or fourth time as I did the first. It just works for me...who am I to question these things.

So I read this book called 'Service with a Smirk' and I enjoyed it. It's a cute May/December story set in the Canadian city of Montreal...I've been there it's a gorgeous city and maybe the home of my hubby's favorite hockey team (Go Canadians!) it's allowed, they're mentioned in the story and can I just say there really is nothing to debate when it comes to which team is better the Habs (Canadians) or the Toronto Makes Me Laughs (Maple Leafs) the stats say it all...but back to the more important subject this audio book.

As far as the story goes...nothing's changed, the story remains the same, so I'm going to borrow from my original review in regards to the my thoughts there...so here's what I liked...

Pascal is a waiter at a high end restaurant and he likes his job. He takes pride in what he does and he does it well. So I'm going to just stop here and say this alone made me a fan of Pascal. I loved reading a story where it was ok that one of the MCs was just an average guy doing a job that is so often overlooked and undervalued. Honestly that was what attracted me to this series in the first place the fact that for me it felt like a tribute to a part of the workforce that is highly under appreciated.

Mathias is in banking he's on the fast track training for a management position but in the mean time he's got bills to pay so he works as a waiter at a local gay bar to enable himself to live in on rue Sainte-Catherine because like it or not when you're in a profession such as banking 'image matters'.

As coincidence would have it these two men live in the same apartment building. Two men, with a considerable age gap between them, at different stages in their lives and yet both wanting the same thing...someone to share their lives with.

Pascal had that once and then he lost it when the man he loved died. He's learned to be content with life as it is or he was until Mathias came along. Watching as these two juggled their conflicting schedules and maneuvered their own insecurities and that of the other was quite the challenge. I loved that they talked and yes, there was some miscommunication so they talked some more because in life that's what can happen. Things get said that seem clear to you and are clear as mud to the other person...so you keep talking and eventually you get to the make up sex...hot, steamy make up sex. Ironically though the best part of this romance was in their conversations. Seeing them get to know each other and find out about each other. I loved that it never felt like Pascal had an attitude of always being right because he was the older one in the relationship and if Mathias made a mistake that came from his youth or lack of experience Pascal neither embarrassed nor chastised him for it he simply acknowledged that when we are young we all make such mistakes and moved on.

Oops, I almost forgot one of the other things I really, really loved about this book the friends. Both of these men had friends who wanted them to be happy, who saw that they made each other happy and encouraged them to pursue the relationship because that's what friends do. When they see that something is good for you the support you and encourage you to pursue it because they're your friend and they want you to be happy.

Back when I read this book age gaps were a bit of an issue for me and while I had my reservations about the age gap in this one and much more a year ago than I do now. It turned out that it really wasn't a problem for me back then and still not this time around either.

Jeff Gelder was the narrator for this story and while I've listened to a few of his audio books already with varying results. I was pleased that this one was one of his books that resonated with me on a better level than others have...not to say that any of them have ever been a total fail for me but this time around I really liked Pascal's voice and found that it suited the person that I have envisioned he would be. While there were some moments when Pascal's voice sounded a tiny bit stilted for me it was more a case of the characters insecurities coming through in his voice, so it added to the emotional depth of the character rather than detracting from the story.

An audio book of 'Service with a Smirk' was graciously provided by the publisher in exchange for an honest review.