If I'm going to keep reviewing this series... 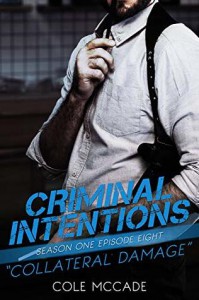 than I think I need to invest in a Thesaurus...because really how many ways can one say "I f*ing love these men, these stories...I can't get enough of them." I mean come on I admit it I'm even starting to sound like a broken record to me...but, facts is facts and fact is I'm a fan of 'Criminal Intentions' 100% bona fide fan.

'Collateral Damage' is Episode 8 of Season 1 and  more than any thing that's come before this story it has a much more relationship driven plot...one that shows Mal and Seong-Jae's relationship becoming more solid...

"So," Malcolm drawled, "you're admitting you actually like me, instead of just tolerate me because I cook for you."

"You are beginning to grow on me."

"Yeah?" Malcolm's grin widened--and he nosed past Seong-Jae's hand, nudging it out of the way as he leaned in closer. "I'll call that progress. Just last week you hated me."

Must be love, right? right? Well at least it is on my part because I love the banter (insert pillow talk) between these two men. It's affectionately snarky as only Mal and Seong-Jae can do.

And to top it all off they work well as a team when they're outside of the bedroom too. This episode may have been a bit more relationship driven but there was still a solid crime to be solved as well. As well as some smaller threads that are carrying forward from previous episodes...things like how's Gabi doing with her new job and roommate? What's up with that guy who's still working at the DAs office? Are Mal and Sade ever going to get their friendship back on track? And what's up with Sade and Huang...ok, this one wasn't touched upon in this episode...but inquiring minds really do want to know? and there are things more things...but you have to read the episodes to find out.

Once again the criminal case involved a parent and child and while I don't want to spoil this for anyone who hasn't read it yet, I will say that the ending had a bit of a surprise to it and thankfully I had episode 9 ready to go on my e-reader.

So what didn't I like about this story...it was too short...sorry, but that's really my only problem and thanks to episode 9 being available it quickly became a problem solved.

An ARC of Criminal Intentions: S1, E8: Collateral Damage was graciously provided by the author in exchange for an honest review.