I've wandered into the world of non-fiction... 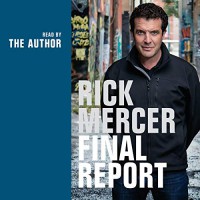 For 15 years Canadians have been entertained by Rick Mercer as he's brought all that is good and not so great about our country into our homes with his own unique style and a very solid dose of humor.

I'm normally a fan of read it or listen to the audio whichever makes you happy but I have to admit int this instance if you want the full experience of a Rick Mercer rant you need to listen to the audio book. It's narrated by the one and only Rick Mercer and if you've ever watched his show than you'll know that listening to this audio book is like listening to his show or at least his Graffiti Alley Rants.

Sometimes his rants were brutally honest and while politics garnered a fair amount of their focus no subject was off limits and all of them were subject to Mr. Mercer's unique brand of humor. From the beauty that is this country and it's people to the troubles that we face as a nation his Graffiti Alley Rants have given us all something to think about and brought issues to our attention that we otherwise may not have stopped to think about engendering at best a sense of national pride and at other times as a nation and at other times as a nation we were humbled by our failings but frequently it was laced with humor.

I'm not a big fan of shows that are politically focused but I was absolutely a fan of 'The Mercer Report' because for me it wasn't just about politics but about awareness and accountability for the our politicians and for all of us who call this country home and often times he did it all while making us laugh.

Nearly every chapter in 'The Final Report' contains a rant from the past 15 years some we've heard, some we've never heard and surrounding these are glimpses behind the scenes sharing the challenges and experiences faced by a team of 4 men as they traveled this country creating a show that few others would have persevered long enough to produce for 5 years much less 15.

If you've wondered about Canada and what it's like as a country, what our people are like get your hands on this audio book or watch 'The Mercer Report' I'm sure it's available in reruns or on DVD but what you'll find is a country that's beautiful, proud and no we're not perfect not even close but we're trying and we know how to laugh at our imperfections and hopefully you'll come away with a better understanding of this country and its people as a nation, but at the very least you'll have a laugh or two...who knows maybe even more.

As I listened to the last part of 'The Final Report' on audio hearing as Rick Mercer spoke about some of Canada's most iconic people I was struck by the thought that while some of those icons are no longer with us there is a new icon in our country and his name is Rick Mercer.

For 15 years he came into our homes and made us look at ourselves and question who we are and where we're heading as a nation using unvarnished truth and humor all while leaving us with something to think about and a smile on our faces.