It's not always the demons we run from that catch us... 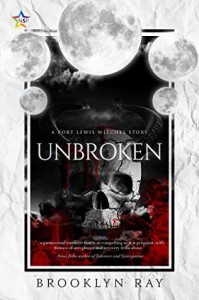 Before I get into my thoughts on the story let's just take a moment to admire that cover.  I've loved the covers for these books each one is unique in image but the style both conveys the over all feeling of the stories and connects them to each other. Also before reading any of these books I would strongly advise reading the warnings at the beginning of each book.

Even though the characters in the first two books were more connected my original viewpoint that these books should be read in order has not changed, however, with this story it's more of an enhancement than a requirement. There's no denying that I've found each story to be on the darker side but 'Unbroken' for me felt like the darkest of them so far.

When Michael's demons chase him to Port Lewis the last thing that he expects to happen is for the demon that haunts his new home to not only help him do battle against them...but to help him win his battle with the past. So far Michael's life choices have been less than stellar and more than one of them has ended badly for him. I found Michael to be a character whose outward confidence concealed an insecure person with definite self esteem issues. There was also a very likable aspect to this character.

I think for me the part of this story that was both the hardest and the best was Michael's history of abuse and how it was addressed. Michael's struggles with his past weren't swept under the rug when Victor came into his life...in fact Victor's arrival into his life was more like the  catalyst that pushed Michael to begin examining what happened in his past and how it was affecting his behavior in the present as well as finding closure for himself. There was no defined beginning or ending of this for Michael just like real life this was an ongoing process for him and something that added realism and depth to his character.

While Michael ran from his demons...Victor Lewellyn was making deals with his. As a witch and a member of one of Port Lewis's founding families Victor is no stranger to witchcraft or the strange things that can happen in Port Lewis. But for the last year he's been tied to the Lewellyn house that he made his deal with a demon in and so far he's managed to scare off every one who's tried to live in it. I think in a lot of ways Michael and Victor are my favorite pairing in this series so far. I love what each brings to the relationship and to each other. Michael sees beyond Victor's exterior image to the man beneath and believes in him. At first he was intrigued by Victor and ultimately he loved him but fearing  him was never something that Michael did. While Victor sees the good in Michael and together they learn to trust and believe in themselves and each other.

At the forefront of this story is the relationship between Michael and Victor but as things progress a secondary story line becomes evident and that's the one connected to the drug 'Essence' a drug that is very potent, a drug that the magical community of Port Lewis wants end the distribution of and the thread that seems to be what will connect this story to what comes next.

An ARC of 'Unbroken' was graciously provided by the publisher in exchange for an honest review.