More Kai and Ryder....sorry no dragons this time... 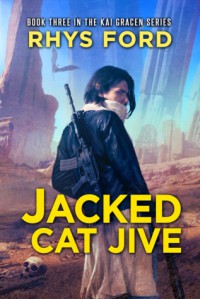 I think I forgot just how much I loved this series. I know a lot of my friends will tell you that I am unashamedly a Rhys Ford fan.  If she writes it, I'll read it and so far I can say without reservation I've loved every word and 'Jacked Cat Jive' is no exception.

As Kai embarks on his latest run to rescue some children at the request of Duffy, one of his dearest friends it seems things aren't complicated and dangerous enough with his personal pain-in-the-backside Sidhe Lord Ryder insisting that he accompany Kai. Ryder has a cousin who's come to town to contest his claim to the Southern Rise Court. A claim that Ryder says is every bit as  legitimate as his own and one that even if he can't refute it's legitimacy Kai is pretty sure that Kerrick's motivations for making it are more than a little suspect, but when Kerrick announces that he to will accompany Kai on his run to rescue the children his friend has charged him with protecting Kai realizes that there's not a lot he can do to stop it since Ryder's already extracted a promise from him that he won't kill Kerrick no matter how appealing the thought may be.

What I loved...like seriously and really loved in this book was the interactions between Ryder and Kai. We're still working with a slow burn here and I admit at the start of this I wasn't sure I'd be a fan of this but given Kai's history with the both the Sidhe and the Unsidhe it really makes sense that he'd be beyond cautious in his dealings with them but here in 'Jacked Cat Jive' we see Kai admit to his feelings for Ryder in his own snark filled way.

There was definitely a more emotional side to Kai in this book but have no fear he's still got a long way to go before he gets sappy on us. I love that on an emotional level Kai is being slowly revealed to the reader. He's not an open book and true to his character in many ways what you see is what you get but that doesn't mean you get it all from the word go. Wining Kai Gracen's trust is truly a task worthy of the gods and one that I'm sure Ryder would tell you is not easily accomplished by any means and once you have it the true challenge is never to lose it.

I found the plot in this book to be a bit busier than that of previous stories...sure there were children to be rescued, but there were several other elements involved as well and while some of them were dealt with here other things were only touched on and felt like small teases of things that are yet to come. So while this didn't quite feel like a cliff hanger, for me, it definitely ended on one hella' big tease,

An ARC of 'Jacked Cat Jive' was graciously provided by the publisher in exchange for an honest review.