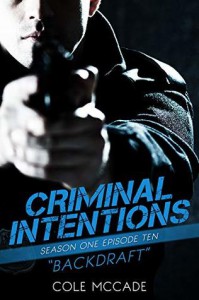 truthfully this one could have easily gotten more than 5 stars from me it I had that option. I honestly can't remember the last time I was as so enchanted with a book series and don't get me wrong there are so really good series out there and I've read a few of them but for me 'Criminal Intentions' is by far among the cream of the crop.

After 10 books I had honestly expected my interest and enjoyment of this series to have at least leveled off, if not maybe even waned just a little, but so far not only is that not the case I'd have to say that if anything it's holding strong and growing.

While I've loved every book so far and if you look at my ratings you'll see they've pretty well all gotten 5 stars from me so it would be hard to tell but without a doubt this one has proven to be my favorite story to date. I loved the balance in the story between crime drama and personal events and while there are some things that hopefully will never change...(read snarky banter)...

Snark about each other...

"Why are you so hot when you're so bossy?"

"Not even I have enough psychological training to unpack that statement."

Snark about people they work with...

"I think we're getting under his skin."

Seong-Jae pressed his lips together. "Remind me again why I like you?"

"Because I'm insufferable, and you're a masochist."

Even friends are fair game...

"...that is Cara's ringtone. I do not want to look. She sends me internal organs."

"You two have the most morbid fuckng friendship, I swear to God."

I admit it, I'm a total fan of this kind of snarky banter and with Mal and Seong-Jae it's as much a part of who these two men are as the fact that they are detectives and on more than one occasion has added a touch of levity to help defray what would otherwise be an incredibly tense moment.

The relationship between Mal and Seong-Jai isn't the only thing moving forward, so are a lot of other things some of which I'm sure the full ramifications from them won't be known for a while yet. While i was absolutely enthralled with this particular episode it's a hard one to review because so much of what happened in this one could be considered a spoiler to previous stories and potentially to future stories as well.

One of my personal favorite scenes in this episode was when Mal took Seong-Jai home to meet his parents...I'm just going to say I loved it for me it was so spot on in terms of how I had imagined this would go. I pretty much felt like I was the proverbial fly on the wall during this meal.

As always we were given a complete story in terms of the crime that Mal and Seong-Jai solved but there were other things...things about Sade, Sila, Gabrielle and ultimately Mal and Seong-Jai that are very, very much unresolved and the question of where it's all heading and how it'll play out...well to borrow a quote from the book that I know you'll see on more than one other review...

"This is just the start of the storm...

and it's going to get worse before it gets better."

An ARC of Criminal Intentions: Backdraft was graciously provided by the author in exchange for an honest review.