"The harsh reality of life is... 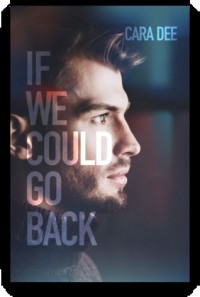 that our happiness is rarely free. Someone always suffers for it."

Cara Dee is one of those authors who can take even the most challenging issue and create a story that's both interesting and thought provoking and she's more than done that with 'If We Could Go Back'.

'If We Could Go Back' is essentially told from Bennett's point of view covering a period of about 5 years beginning with that first day on the commuter train going to Seattle when Kieran boarded and sat down opposite a rather frazzled and worn out Bennett. It's a slow burn as the men get to know each through brief conversations and shared commiserations about life during their shared commute.

Bennett and Kieran are both married to other people...both have children with those other people, both are in what has essentially become a loveless marriage. Neither of them were looking for a romantic entanglement. They just needed a connection something...someone that was theirs...a friend. Someone to have an occasional drink with, hang out with, blow off steam. Neither man intended for things to go where they did.

I was honestly surprised by how much empathy I had for these two men. I think a big reason for that goes to motivation neither of them ever wanted or intended to hurt their wives and in fact they went to considerable lengths to try not to do this but and maybe this was the catch for me the thing that made the difference for both of these men their marriages were little more than a charade and had been for a while it was just a matter of people admitting it...don't misunderstand I'm not saying that this makes the cheating ok, I'm just saying that the reality is the cheating may have hastened the end of things but it didn't cause it. Sadly, there was so much more going wrong in both Kieran and Bennett's marriages.

Cheating's a hard line for most people in real life and I know I'm one of those people but as with so many things in life circumstances can often mitigate events and for me this was the case for Bennett and Kieran.

At the end of everything I was left really liking both Kieran and Bennett and of course their kids, Bennett's father...yeah, I had a few tears for him but also he was simply awesome as was Bennett's sister, then there was Kieran's family some of them were pretty awesome some of them...well not so much and I really need to have words with his momma. That woman pft! not worth the time of day.

I love a nice fun, fluffy love story as much as anyone but sometimes it's good to read a story that holds such a connection to what happens in the real world like this one does. It's good to read a story where the characters are human and fallible, where mistakes are made and we as readers get to watch them not only make those mistakes but pick themselves up, dust themselves off and figure out how to fix things and carry on. Cara Dee writes such stories and I'm not ashamed to say she left me in tears more than once on this one. She also had me filled with anger, frustration and grief all interspersed with moments of happiness, tenderness and love.

I know cheating's a hard line for many but truthfully if you can have faith and hang in there this is one of the best stories I've read this year and I would definitely recommend it and if you're worried about not having read some or any of the Camassia Cove series don't be this one definitely stands on it's own.

An ARC of "If We Could Go Back" was graciously provided by the author in exchange for an honest review.