All those other reviews that you've read... 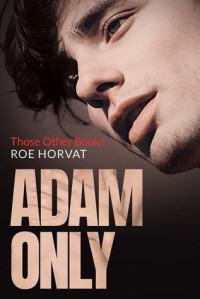 well...turns out they're true. This book is sexy as f**k!!! So if sex is something that bothers you or makes you squirm maybe this isn't the book for you...or maybe it is?Maybe it's time to let go of some inhibitions.

Adam is a very tactile person or at least he is when Christoffer's around but it seems Christoffer has the same affliction and he takes every chance he can to touch Adam the sweet, magical man who has captured his heart.

This is the second book in the author's series entitled 'Those Other Books' and each one can be read as a  standalone with the exception of 'Joel' from 'The Other Book'  the characters in both books do over lap and the events from 'The Other Book' actually take place after the events of 'Adam Only' and yes, I know this sounds confusing but whether you've read 'The Other Book' yet or not it's really a non-issue...really read them in whatever order makes you happy and everything will be fine.

'Adam Only' is similar to 'The Other Book' in that it's a love story that's both romantic and incredibly sexual...Adam and Christoffer's story is uniquely their own and there's a very natural ease with which Adam submits to Christoffer that feels both incredibly sensual and right. Don't get me wrong this wasn't a D/s relationship nor was there any real kink involved, what there is though are some very hot, sensual and romantic encounters between two men with a definite age gap.

'Adam Only' is about two men with different needs who feel like they don't fit...that the world doesn't really hold a place for them until they meet and little by little each man begins to realize that...one man's needs is another man's wants and it just takes the right man with the the right wants to make things fit creating a place where they are both loved, wanted and safe.

To echo the sentiment of more than one review 'Adam Only' is a book that is deserves being read without interruptions and probably best not at work, or the local Starbucks or even on the transit ride home at the end of the day...seriously alone time it's a thing and in this case it's a good thing.

An ARC of 'Adam Only' was graciously provided by the author in exchange for an honest review.