Thankfully this is only the season one finale... 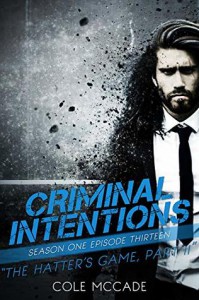 and not the series...

Back in July of 2018 this series came across my radar when the blog that I review for was asked if anyone would be interested in reviewing the first episode of a new series entitled 'Criminal Intentions' being someone who enjoys a good crime drama I decided to check it out and I was blown away, hooked, wanted more and thus began my addiction to 'Criminal Intentions'.

And here we are 13 episodes later and I am every bit as invested in this series maybe even more than I was after reading the story that started it all...'The Cardigans'. But that was only the beginning of what for me has become a reading addiction. For the past few months no matter what's going on in my life one of the things that I've consistently looked forward to has been the next episode in this ongoing series.

For me 'Criminal Intentions' stands out in a sea of books for a number of reasons not the least of which is the MCs Malcolm Kalahji and Soeng-Jae Yoon, the cast of secondary characters from Sade & Min Zhe, to their boss Captain Zarate y Salazar, to Mal's ex-wife Gabrielle and on and on right down to Sila, yes, I hate him with a passion but as bad guys go this is one hella' scary dude...so many characters who develop more and more with each episode  and who are integral to this story. Storylines that are truly tangled together in a complex spider's web. The fact that each episode has steadily and consistently not only held my interest but increased it and last but not least I've truly appreciated the author's efforts to keep the story release on track. While this hasn't been a part of my wanting to read this series it has actually been a part of what's kept me reading. I've got more than a few series sitting on my shelves because an author has wandered off to do other things and it's left a big time lapse in my the release of books which has allowed my interest to wander off to other things and hopefully I'll get back to them but in the mean time I've squirreled and many a book has fallen by the wayside.

Now let's get back to this series and specifically this final episode of season one...

Mal and Soeng-Jae have come a long way since then but they still have much further to go. As individual characters, as partners at work, as a couple these men had fascinated and enchanted me. I am nowhere near ready to say good-bye to them and thankfully don't have to...yet. In episode 12 we were left in a very precarious place but here in the season finale a number of things are cleared up. If I was holding my breath for episode 12 here in episode 13 I'm pretty sure that not only was I holding my breath but I was doing it with my eyes closed and if you think that didn't make reading hard...well all I can say is give it a try sometime.

The 'Hatter's Game' Part II was every bit as much...if not more, of an emotional roller coaster ride than previous books. I lost more than a little sleep reading these last three episodes because stopping at any point in time just didn't seem like a viable idea. I have to admit as much as I wanted to get to the end of this series I was also hoping it would never end. For as much of an emotional roller coaster ride as this one took us on it was worth it to get to the ending which for me was perfect...I was left in a good place knowing that Mal and Seong-Jae are well and safe but also knowing that there is more to come and while things are at a lull for the moment it's a temporary condition and come season 2 there will be more heart stopping, pulse pounding, action, angst and emotion and I am so on board for all of it.

A copy of 'The Hatter's Game' Part II was graciously provided by the author in exchange for an honest review.