You know that moment...the one where things can be saved or lost... 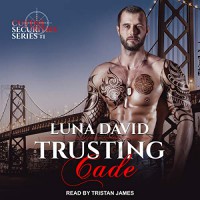 This one probably ended up closer to 2.5 than 3 stars for me but there's no 1/2 stars here and I'm not feeling like I want to split hairs so I'm calling it a day at 3 stars.

For the most part this one was ok and I liked it. Tristan James was the narrator so no problems there as far as I'm concerned. Mr. James is one of those narrators who never fails to provide me with an enjoyable audio experience when it comes to the audio portion of things.

As for the story there were two issues that really dragged this story down for me...the first one was the insta-love and folks we are talking insta-love here. This was probably one of the fastest cases of love at first sight on record. It whipped by so fast that it feels like I've got a case of whiplash which resulted in the fact that for me the connection just wasn't there.

There were a couple of times when Cade felt like Braden didn't have as much faith in him as he should and Cade was all "You should know by now..." and there sits me going "He should know what by now? He's had the relationship from hell and it's still stalking him, he's known you for 5 f*ing minutes and you think he should know what? That you're the end all, be all of boyfriends?" sorry but I think Cade needed to get over himself a little.

My second issue was in regards to the events that transpired when they were searching for Braden...I've already had my little rant about that in an earlier comment so for now I'm just going to say that 'not only was it unbelievable at times it was also laughable' and not in a good way. This should have been a very dramatic and pivotal point in the story. It was the perfect chance for the author to make, what was until then an average story into something better...it was the the moment when things could have been saved or lost...unfortunately for me it was the moment when things were well and truly lost and the story became locked in as being less than the solid 3 stars that it was until that point.

Now having said all of that I'm off to the second part of Cade and Braden's story in 'Protecting Braden' so there's still a chance for the author to win me back. I'm willing to keep an open mind and she's already got a point in her favor because this one is also narrated by Tristan James...so, I know it's a win for the narration but I'll just have to wait and see how the story goes.