A new dragon story by a new to me author... 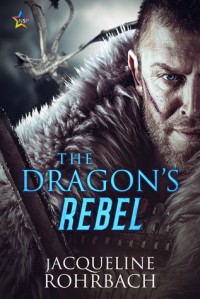 I love dragons...my family will tell you 'I love dragons' my friends will also tell you that I love dragons...so when one of those friends poked me and said 'hey, have you seen this. It's a new dragon story and you can get it from NetGalley.' that's exactly what I did.

This is the first book I've read by this author and I was to say the least suitably impressed not only did she give me a dragon story that I enjoyed...she created a dragon that I would honestly love to read more about.

Cheron was simply a rebel leader but now he's a newly crowned king and he's a king on a mission that takes him to the kingdom of Wren Gardens where he hopes to find what he needs to free his goddess. What he finds instead is a very alluring and intriguing love slave named Ekos...a love slave who seems to be more than he appears.

It soon becomes clear to Cheron that Ekos has his own mission but what remains to be seen is can Cheron trust Ekos and will his mission destroy them all.

I loved how spirited Ekos was and how he interacted with Cheron it was very much a love to hate or maybe that was hate to love relationship between these two. Throughout the story no matter how they tried or didn't try they were perpetually being thrown together and found themselves to be allies sometimes willingly...sometimes, not so much.

As well as Cheron and Ekos, I found myself quite taken with Lion and his connection to Ekos was surprising in a very delightful way.

Even more than the characters and trust me I loved the characters what impressed me with this story was the world building. Usually if an author's going to lose me in a fantasy story this is where it's most likely to happen and not only did she not lose me but I thoroughly enjoyed this aspect of the story. Everything was vividly brought to life for me from the clothes that were worn to the king of Wren Gardens private gardens which seriously could have stayed private as far as I was concerned that king was one seriously sick and twisted dude.

As much as I love dragons though I can also say that I'm not a fan of dark fantasy and while I can't say that I'd label this one as dark fantasy for me it was definitely a fantasy story that leaned strongly towards the dark side, which i very much enjoyed in spite of this. I think the one thing that maybe could have worked better for me would have been if the romance was a little bit stronger at times but still the story was solid and overall I quite enjoyed it and I'll be watching to see what else this author has that will catch my eye.

A copy of 'The Dragon's Rebel' was graciously provided by the publisher via NetGalley in exchange for an honest review.