I love a good mystery so it only stands to reason that... 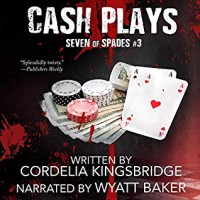 I loved this book...

Detective Levi Abrams and PI Dominic Russo are back...and so is the Seven of Spades...he's back with a vengeance.

Things have taken a turn for the worse and the Seven of Spades (SoS) steps up his game. The murders are becoming more violent, more frequent and just more. While Levi and Dominic's relationship seems to be fraying at the seams.

Levi's control over his rage is slipping and Dominic's control over his gambling addiction is following down the same slippery slope. Neither man seems to realize what's happening to the other and to them as a couple. The comfort and support that they want to give each other is slipping away and if something doesn't give soon Levi's going to lose more than his temper and Dominic's going to find out that it's not just his bank account that's empty.

I keep thinking that circumstances can't get more dire...things can't become more tenuous than they are but at the end of each book I realize that if it's always darkest before the dawn than it's still just the middle of the night.

This series is quickly becoming an absolute favorite of mine and I'm totally addicted to it on audio. Wyatt Baker is doing an absolutely superb job as the narrator and I've got my fingers crossed that this doesn't change.

As for the stories I can't  believe how emotionally invested I find myself getting in them. I was hard pressed to set this aside for anything...even sleep was sacrificed for a time. Between Levi and Dominic's relationship issues and the SoS there's no end to the suspense in this one and if the first two books were good, ok they were actually better than good...this one was abso-freakin-lutely fantastic!!! I loved it.

While I could probably go on and on about how much I'm enjoying this series. I really think the best thing I can say is if you're looking for a good and I do mean seriously good murder mystery series to listen to check this one out you won't regret it and if audio's not your thing than there's always the e-books. No matter what the format this one is worth the listen/read.

An audio book of 'Cash Plays' was graciously provided by the publisher in exchange for an honest review.