This boyfriend for hire, is worth his weight in gold... 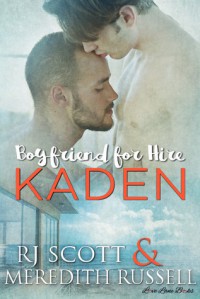 Kaden is the second book in RJ Scott & Meredith Russell’s ‘Boyfriend for Hire’ series and while I really enjoyed Darcy, book #1 in the series I found Kaden to be just a bit more enjoyable. While the Darcy and Kaden both work for ‘Bryant & Waites’ this is the only connection they have to each other making both stories easily readable as a standalone.

When one of the worst moments in Ryan Levesque’s past shows up on social media for all the world to see, his manager decides to use some unorthodox means by which to deal with the resulting negative backlash to Ryan’s acting career and before he knows it Ryan finds himself at ‘Bryant & Waites’ about to embark on a public relations blitz that will hopefully put his public image  back on track. Provided he can keep his personal feelings in check.

Kaden’s worked for ‘Bryant & Waites’ for a few years now and while he’s never had a client as high profile as Ryan Levesque, Hollywood’s latest golden boy, both he and his cousin Gideon (owner & manager of Bryant & Waites) are confident that Kaden’s the right man for the job.

I loved how this story unfolded. The relationship between Ryan and Kaden was a slow burn and initially Ryan was faced with a bit of an emotional dilemma. While he knew that his agent’s plan was very probably the best solution for his situation, it still didn’t go far towards gaining enthusiastic participation from him.

While I liked both of the MCs in this story, I found Kaden easier to warm up to and I loved that his character gave Ryan a chance to share his side of things and that he didn’t just buy into the part of the story that was made public to decide that there wasn’t more to things and that Ryan. I also really liked that Kaden was portrayed as being someone who was kind and patient but without making him seem like he was someone who could be easily manipulated or victimized in any way.

The story was told from shifting POVs which for me made a lot more sense than if it had all come from one direction since we were given not just Kaden’s and Ryan’s backgrounds but some of their personal and emotional reactions to events and it just feels more natural to find out from Kaden or Ryan how they felt about things that happened to each of them in the past or even the present.

While I really enjoyed this story, I have to admit for me there was one minor issue and that was the relationship between Ryan and his sister.  Obviously, they were close she was his PA and while her actions show us that she really cared about her brother for some reason I just wasn’t feeling that close sibling bond that they had and in truth this was probably at least a little bit of ‘it’s me not you’, but other than that little glitch I really enjoyed this one and found myself very invested in the story.

While both Darcy and Kaden are set to the theme of ‘the pretend boyfriend’ each story presents a very different plot and I find myself curious to see what a third book will bring to this series. I’m not sure whose story is next in this series but I’m very much looking forward to finding out.

A copy of ‘Kaden’ was graciously provided by the authors in exchange for an honest review.