Well this one just tickled my fancy... 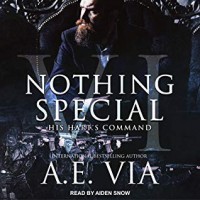 I've listened to this series from the first book and honestly for the most part it's been ok not great not bad just ok but with some memorable moments, that is until now...

I very much enjoyed the last book "Nothing Special V" which was about Tech and his recon marine Edwin Steele but at the end of that book there were some things that hinted at who this book would be about and while we've met Ivan Hart, the leader of the S.W.A.T. team that backs up God and Days task force in previous books it was only at the end of 'Nothing Special V' that we get a hint of Lennox Freeman hacker extraordinaire and best friend to Tech.

Ivan and Lennox worked for me...they just clicked and I loved these two men together. Ivan in all his alpha male bravado but still seeming so vulnerable when we get a peek at his insecurities when it comes to his relationship with Lennox and his struggles to overcome the insecurities that he was left with as a result of his marriage. I just loved Ivan, he really was a big old teddy bear.

Lennox has a past that speaks to abuse and while he struggles with his fears in certain situations he never stops working to overcome them and not let those fears run his life. He's truly one of the bravest characters in this series and I absolutely loved how much he wanted to give Ivan the type of relationship that he deserved...loving and supportive. It's actually what both men deserve and it was such a positive force for both men to draw on. I also really, really enjoyed Lennox and his snark...seriously no one does snark like a Brit.

"His Hart's Command" is by far my favorite story in this series and once again the narration is provided by Aiden Snow giving the listener the continuity of voices for characters and narration that can truly mean the difference between an ok listening experience and a truly enjoyable one.

As with previous stories the author has left us with a potential pairing for a possible future story and in this case neither man is a member of God and Days task force but they are every bit as alpha male as the men in previous stories and with names like Fox and Bull how could I not want that story...so, I'm just going to keep my fingers crossed that this is going to be a thing and hopefully it'll be a thing one day soon.

While I appreciated having been offered a copy of this book for review I own this one because I was so anxious to listen to this one that I purchased a copy as soon as I saw that it was available...which was basically as soon as I finished listening to 'Nothing Special V'...what can I say 'will power, I has none and I regret nothing!'