V.L. Locey has created a holiday story filled with... 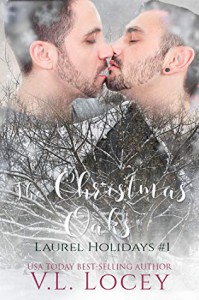 the joy of the holiday season and the promise of new beginnings from second chances with this first book in her new series ‘Laurel Holidays’.

When Bryan Graham left Kutter’s Summit to start a new life in Nashville going back was never a consideration for him. But when his grandfather left his hunting cabin and the land it was on to him, Bryan finds that going back is exactly what he has to do. So he develops a plan and it’s a fairly simle one…Bryan’s plan is to take a couple of weeks to spruce the place up, put it on the market and make a quick sale then it’s back to his Nashville life.

All that changes when Bryan arrives at the cabin only to be met by a less than friendly but equally grown up and handsome childhood friend in the form of  Parson Greer, whose also consumed by the demons of a war that left him with a lot of bad memories to torment his days and haunt his nights.

As Bryan and Parson become reacquainted and their feelings for each other grow, it becomes very clear that it’s going to take more than the good will of the season for these two to make things work. Bryan’s a talent agent for some of Nashville’s brightest stars…unfortunately one of those stars isn’t always making the brightest choices and keeping her in rehab has Bryan popping antacids like Pez candies, Parson’s trying to manage his PTSD on his own and then there’s the issue of Bryan who wants to return to his life in Nashville but he also wants to see what his life could be like with Parson in it.

Thankfully while Bryan may not have a Christmas angel on his side what he does have is a sister who wants him to be happy and a PA who genuinely cares about him as a friend and keeps his company on an even keel when he’s not there.

While Parson’s PTSD and Bryan’s client’s addiction were both very much a part of the story with neither issue overwhelming the story and turning it into something overly dark and somber that would keep it from being the sweet, holiday romance that if feels like it was intended to be, neither were these issues treated lightly.

I really loved the epilogue it was the star on the top of the tree. While everything wasn’t tied up with a perfect holiday bow it definitely felt like all that was needed for it to happen was a bit of time. “The Christmas Oaks” is a warm holiday story that truly shares the meaning of the season. It’s not about how pretty or how big the bow on the package is or even what’s in the package…it’s about the gifts that are given from one heart to another…gifts of faith, hope and love. Gifts that cost nothing, but often mean everything.

I’d definitely recommend this one for anyone wanting to get into the holiday mood by way of a little reading romance.

An ARC of “The Christmas Oaks” was graciously provided by the author in exchange for an honest review.