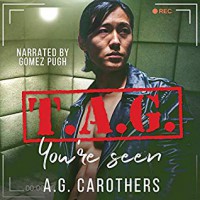 T.A.G. You’re Seen is the first audio book in a new series by new to me author A.G. Carothers and narrated by Gomez Pugh. Overall, it was an interesting premise…T.A.G. stands for ‘The Assassins’ Guild’ and I think the name says it all as to what they’re all about. ‘T.A.G. You’re Seen’ is a story that leans a bit more towards the humorous side than other books of it’s ilk.

Before I get into what did or didn’t work about the actual story, I just want to take a few words to say that while this was a new to me author, I’ve very familiar with the narrator. I’ve listened to approximately 10 audio books by this narrator and while I’ve enjoyed them all to varying degrees. I found that Mr. Pugh showed a broader scope and diversity with his voices in this story than has sometimes been heard in previous narrations…so overall when it comes to the audio aspect of this story…a very solid 4 stars for this.

After having botched his latest assignment, Mr. W is having a bit of recovery time by way of an ‘easy’ assignment. His most recent mark is Jacob Peters, an apparently innocent English professor who lives in a small mountain town. Only it doesn’t take long before Mr. W decides something is amiss and he’s determined to get to the bottom of things.

‘T.A.G. You’re Seen’ was not quite the story that I expected and truthfully it’s left me in a bit of a quandary as to whether I loved it or hated it…ok, maybe hates a bit of a strong word. I liked the overall premise and there were a lot of details that I enjoyed like the mystery of Jacob Peters, I honestly wasn’t expecting this.

I was also more than a little amused by some of the ‘tortures’ Yoshi used during the course of this story… it turns out that plastic wrap is useful for more than keeping food fresh, who knew? Certainly not I and apparently torture by music infomercial is a thing…while the idea maybe a new concept to me, I can see the merit, having lived through the days of K-tel records.

For the most part the characters offered potential…although I think I would have liked it if they’d had a little more consistency and depth to them…especially Yoshi, I just found that his character vacillated between being an assassin and…well, a twelve year old who’s decided that his penis is his favorite toy…sorry, but Yoshi just seemed a bit to consumed with this part of his anatomy given the circumstances of his life…maybe, not the brain that he should have been using for important life choices.

I did however like Conner or as Yoshi called him ‘Connie’. Connie was the brother of Yoshi’s heart and they had a very close bond that I found to be quite sweet and endearing especially given that they’ve been raised to be bad ass assassins and unfortunately the other thing that I really enjoyed was as how the plot played out, which I honestly don’t want to say more about since I don’t want to spoil the story for anyone who hasn’t read it.

The thing that just didn’t work for me, and please note this is entirely a matter of personal reading likes and/or dislikes was in regards to the sex…even though BDSM and/or breathe play aren’t my thing, when used in a story and done right it can be hot but at the same time when it comes to things like ‘watersports’ and ‘humiliation’…not my thing and never going to be hot for me no matter how well written the scene is but  I knew going into this that, I would encounter scenes involving these predilections and as we all know forewarned is forearmed. So feel free to assume that this did factor into my rating but only marginally…let’s say .25 to .5 of a star.

At the end of things, I came away with bit more that I liked and/or was curious about than things that truly bothered or just didn’t work for me, so for me the juries still out as the whether or not I’ll be continuing with this series but I’m certainly going to be checking out the next book before I make a firm decision one way or the other.

An audio book of ‘T.A.G. You’re Seen’ was graciously provided by the publisher in exchange for an honest review.