Things are getting seriously good here... 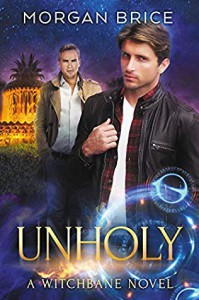 ‘Unholy’ is the most recent addition to Morgan Brice’s ‘Witchbane’ series and for me as well as becoming my favorite in the series, so far, it’s also accomplished two things…first it’s simply taken things to a whole different level and secondly, more so than any of the previous books, it’s connected the ‘Witchbane’ series to both her ‘Badlands’ and ‘Treasure Trails’ series as well as her ‘Deadly Curiosities’ and ‘Night Vigil’ series which she writes as Gail Z. Martin.

While this may all sound a bit confusing and maybe even overwhelming because one might ask ‘Oh lordie, you mean I have to read all these series to keep up with this one…the answer is no.’ The connection from series to series is the characters and what they all do. In general, in each one of these series the MCs are dealing with the paranormal either relics or creatures (ghost, ghouls, vampires, etc.) and while the MC’s interact from series to series the author provides enough background to comfortably enable the reader to read as many or as few of the series as you’d like. Personally, I’ve been reading the ‘Badlands’, ‘Treasure Trails’ and obviously ‘Witchbane’ series but haven’t even dipped into ‘Deadly Curiosities’ or ‘Night Vigil’ which isn’t due to lack of desire but a lack of time…so many books, so little time.

Here in ‘Unholy’ Seth and Evan are once again hunting one of the dark warlocks responsible for killing the descendants of the deputies who participated in their hanging only this time they’ve lost the element of surprise and the warlock not only knows they’re coming, he’s taken his sacrifice early and now he’s hunting Seth and Evan. He’s placed a curse on them, one that comes with an expiry date. So, time is of the essence for Seth and Evan. Thankfully here in Charleston, Seth and Evan discover that while time may be running out their resources are stronger than ever.

Without a doubt the absolute best part of this story for me was how much the characters from all of the series that I’ve mentioned got to interact and while I haven’t read them all I had no trouble following what was going on and who was who but, I also developed a strong urge to read the books that I haven’t gotten to yet. So yes, my goal is to do a big binge read on everything that I’ve missed to date and happily while the series are somewhat connected the timeline for each series stands separate and apart from the others.

I’ve been a fan of this series and ‘The Badlands’ from the first books. However, I have to admit until now the ‘Badlands’ has been the series that’s held the stronger attraction for me but with ‘Unholy’ all bets are off and I’m every bit as addicted to Seth and Evan as I am to ‘Simon and Vic’.

This story hooked me quick and fast. I stayed up well into the wee hours of the night reading and then I was awake in the wee hours of the morning to jump back into things. With the events of ‘Unholy’ the author has opened up a whole new world of possibilities for how things play out as Seth and Even continue their efforts to end an age old curse that began over a hundred years ago with the hanging of a coven of dark warlocks and I’m more than a little curious to see how things play out not just for Seth and Evan but for the full cast of characters that that author has introduce us to in this series and the ones that it shares a connection to.

An ARC of ‘Unholy’ was graciously provided by the author in exchange for an honest review.