Love According to Liam...isn't quite how the it works in the real world... 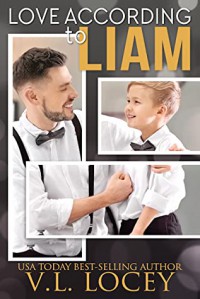 Liam's an adorable and precocious child and if memory serves me at all he's somewhere in the 5 year old range at best. I remember my son at that age and the filters were essentially non-existent. So for me...Liam's a fairly typical reflection of his age group. It's an age when children can be adorable and loving and fiercely loyal while also being a bit self-centered it's not in a mean or nasty way. It's just that they're children and their world view has a much more limited scope than that of an adult with considerably more life experience.

So for the most part I honestly have no issue with Liam's behavior throughout this story. For me, he was just a kid being a kid. I didn't have a problem with Bryn's behavior he love's Mike and more than anything wants to be a loving and supportive husband but as any good spouse knows it's a balancing act and sometimes being a good spouse means not being the one to make the decisions but the one who supports the decision their partner needs to make and while it was hard for  Bryn, he did it to the best of his ability.

I also had no problem with Mike. I totally got where he was coming from and to be honest I was 100% on his side...surprisingly it was Kelly who made me blow a gasket. I really liked her in the first book and while I can't say that I don't like her in this one, what I can say is that I don't like much of her behavior. I apologize for being a bit circumspect here but trying to explain this and not give away the story is a bit of a daunting task. Bottom line for me was that while I understood a lot of Kelly's actions and rational there were a couple of things that no matter how she cut it, in my eyes her actions were a betrayal of Mike and also undermined him. So without getting really wordy and saying a whole lot of nothing here to avoid spoiling the story. I'll just summarize by saying that this for me because of some similar life experience with certain events hit a bit too close to home for me and the result was a whole lot of anger and frustration with certain characters and events in the story resulting in a less than stellar read for me.

'Love According to Liam' definitely wasn't a 'bad' read in that the story was well written  but as I said parts of it just hit a bit to close to home, so if you're a fan of this series carry on, I know I will. I'm still looking forward to reading more about Bryn and Mike and the changes that are coming into their lives and maybe something in that will leave me feeling less disgruntled with this story. But rest assured this one's definitely me and I'm willing to own it.

An ARC of 'Life According to Liam' was graciously provided by the author in exchange for an honest review.