Sometimes it's the little things that fuel our imagination... 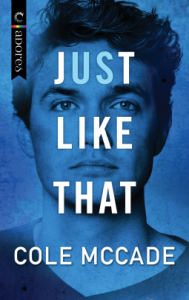 I admit this is purely conjecture on my part, but I'm going to run with it. Cole McCade is by no means a new to me author...what is new to me is reading a story by this author that is set in the world of Malcolm Khalaji and Soeng-Jae Yoon. Ironically it is also the place where I first crossed paths with the name Summer Hemlock and having said that rest assured those who have not read the Criminal Intentions series will have no problem with reading this story. The connection between that series and this story is minuscule at best...the mention of a name that's it...just a name Summer Hemlock. But I'd like to think that this name grabbed the author's attention and wouldn't let go until he agreed to write a story where Summer Hemlock got to be a real boy and have his own happily ever after.

"Just Like That" is a story of going home, second chances, finding love, starting over and learning to forgive yourself.

Summer Hemlock is returning to his hometown of Omen, Massachusetts to begin a new job at Albin Academy and be closer to his aging mother. The fact that Fox Iseya, his teenage crush is still teaching there is merely a happy bonus of this.

Fox has spent years hiding behind a wall of grief after losing his wife. He's held everyone at a distance and now with the arrival of Summer, he'll begin to make his break from his responsibilities at Albin so he can move on.

As Summer's teaching residency begins in preparation for him to take over Fox's position after he retires. Summer finds himself growing bolder as he gives in to his feelings for Fox and begins a relationship that forces Summer to find the confidence that he's going to need if he hopes to get past the walls that Fox has built around himself during his years of grief.

While the relationship between Fox and Summer is rife with attraction between the age difference and the precariousness of Fox being Summer's mentor it's going to take some maneuvering on both of their parts to find the middle ground that they can be comfortable on.

My one and only niggle with this story was the ending. For me it felt just a bit abrupt and I honestly felt that it there'd been just a bit more story post HEA this one would have been 5 stars and then some, so instead I'm going with 4.5 stars and I can't wait for the next installment in this series.

I became a fan of this author nearly two years ago when I first read episode one of his series 'Criminal Intentions' and I have to say in spite of the fact that it's the same author comparing this story to that series is like comparing apples to oranges and just shouldn't happen beyond that in either case the writing is compelling and the stories are intriguing. I was both surprised and delighted with just how different 'Just Like That' is from the author's previous works that I've read.

'Just Like That' is a sweet story that drew me in with ease and gave me characters that I won a place in my heart. The heart of this story is love...not just for someone else but it's about two men learning that in order to love each other they need to love and forgive themselves as well.

A copy of "Just Like That" was graciously provided by the publisher in exchange for an honest review.