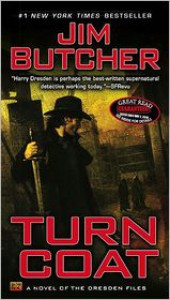 Turn Coat is number 11 in the Harry Dresden series and I thought that maybe things would be getting a little stale by now, but, no Jim Butcher has secured his crown as King of Urban Fantasy in my mind. Harry gets better and better with each story. It amazes me when an author can create a world as rich and three dimensional in my mind as the real world with nothing more than words.

Harry is surrounded by treachery in this one and the depth of it is even more than he has perceived. He could take the easy out on this, no one would blame him. Why should he defend Morgan who has never done anything other than make his life difficult. Yet he sees beyond that to a man who is falsely accused and he puts himself and those he cares most about at risk to set this wrong to rights.

The ending of this book has so many things in it that I did not expect. I did not expect to cry as much as I did. I mean hey it's urban fantasy not some tear jerker romance novel right? Well no matter I cried and I cried for a character that to be honest I've never liked. I cried for the loss and suffering that others endured and I cried for Harry because he knew that much of what they endured was out of a sense of love and loyalty to him. Because he asked it of them, they gave of themselves and then a price was paid. Just as so often happens in real life.

For anyone who have never read this series. I highly recommend it. Some of the earlier books may not be as enjoyable or so I've heard for me they've all been such a wonderful reading experience. Mr. Butcher adds layers upon layers to the world he has created and he does it a bit at a time in each book rather than overwhelming you with it all at once.

It's been a while between my last book and this one, I'm not sure why I just kind of slid off the path, but I'm back now. Sorry Harry, I missed you. You really are a good friend to wait around for me like this. See you soon, I just need to go grab the next book off the shelf.