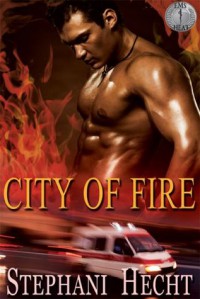 This was my final hope for EMS Heat. I wanted to love this book, I wanted to be able to say "Yes, it's all back the way it should be." instead I'm left feeling sad because a series that I have come to enjoy with a cast of characters filled with potential has faded into mediocrity and for me obscurity.

In STAT I at least was able to see the story the author was trying to achieve even if I didn't feel or find that connection that a good book with provide. I knew the intent or potential of what could have been a good story was there. This story was as near as I could tell a slice of life for the EMS workers of Flint, centered around Matt and Lucas. I was hopeful revisiting these two  men whose story was told in EMS Heat #3 Lights and Sirens one of my favorites, I hoped and wished for the quality of story that was in their original story. My hopes were dashed and my wishes unfulfilled.

What I was left with was a poorly edited hodge podge of events some were connected some were not. None of them were emotionally gripping even the ones that normally would have grabbed my heart and made ache for the victims just left me blah. But worst of all the editing or the lack there of. On two separate occassions Matt was talking to James, his medic partner when Jame suddenly morphed into Lucas his life partner who should have been in the ER where he's a nurse not suddenly in the ambulance or on site talking to Matt only to turn back into James in the next sentence and then there's the issue of Luca? I don't know who Luca is, for the sake of argument we'll assume it should have been Lucas and got missed in the editing along with all the extra words that made no sense or had me re-reading sentences trying to decide which words belonged and which ones didn't.

As a reader I feel that when I buy a book I owe the author a sincere effort at reading said book before forming an opinion on it, I nearly DNF'd this one. The lack of real story or plot line was sad, the lack of editing was astounding and so disconcerting when trying to give honest effort to read the story, thankfully it was a short story. The write up on GR said I was getting 86 pages, my e-reader said I was getting 45, my Reader for PC program put it at 36 pages. This happens and I don't really care what I do care about is the quality of what is on those pages. So for me this series is a DNR.