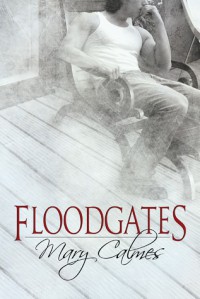 I read Floodgates as part of a group buddy read, which I have to say was fun because the thoughts and opinions were wide and varied and all were appreciated, respected and allowed which only made me enjoy the book that much more. Mary Calmes is my go to, warm fuzzy, feel better, total escape from reality and all that sucks read, without fail. There are other authors but she is at the top of my list.

Yes, her books have been described as very formulaic, but it works and I love them. So what was different about this book from her series A Matter of Time (AMoT). I found 2 things and one of them to me was a biggie. Anyone who has read AMoT is familiar with the MC's Jory & Sam. In this book we have Tracy(Jory) and Cord(Sam). I liked that Tracy was given a loving family and that they played a fairly prominent role in his life. Unlike Jory from AMoT or Stefan from Timing and After the Sunset Tracy has a family, a very close knit family consisting of 2 brothers and a father. One of those brothers happens to be Cord's best friend. Cord also has a family that loves him, unfortunately they just don't do the gay thing because unlike Sam, Cord only keeps his clothes in the closet.

The other difference that I noticed was Tracy's best friend was male, another gay man who was in a committed relationship. Both Jory & Stefan had female best friends. A big change, no, not really but still something that I liked and noticed.

I liked Tracy that person that we all know with the charmingly infectious personality, who makes everyone smile and want to be with them, touch them in some small way, protect them and just float in their orbit and Cord, strong, a definite Alpha male and protector, sees what he wants and goes for it.

I disliked Breck, immensely! The man was a self centered, arrogant douche. The best thing that ever happened to Tracy was finding that out and Celia, well let's just say she and Breck deserved each other so all was as it should be.

I think we all have go to authors and books that we read because we just like them, they make us feel good, they make us smile and feel entertained. If I equate books to food for the brain, Mary Calmes is my junk food without all the calories but still having all the yummy goodness of my favorite treat, that one that you just can't quit nibbling on until it's all gone and your sweet tooth has been satisfied.