This is what I did yesterday... 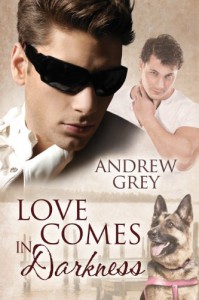 I really liked this book it was a fun sweet read and so easy to get into.  Our MC Howard was born blind, he had good and loving parents who have both passed away so all the family he has in the world is his sister and niece. He's dating a jerk named Cedric (and did I mention that Cedric is a Jerk!!!)

I really like Howard. He's not perfect and in hindsight he realizes that there were things that he's made mistakes which didn't seem like mistakes at the time (ok, anyone who's never done this, I totally tip my hat to you because I'm on team Howard on this one), we have Geordy, he's just  a mountain of sweet, adorable, considerate, helpful man (we all needs us one of these) now if this isn't enough add in a little tragedy, a sweet little girl named Sophia who loves her Uncle and one incredibly intelligent seeing eye dog named 'Token'  and you are guaranteed to keep me reading and that is all it takes. But just to be on the safe side let's throw in Patrick & Dan from book 1 Love Comes Silently because I loved these two men they were so sweet and sexy and wait I said sexy right? Ok, so now you've pretty much got the picture right?

There were 2 things in this book that made me pause and have a "WTF?" moment the first was when Cedric, you remember him, right? Think jerk, well he shows up and that's all that I'm saying unless you read the spoiler. .

he magically appears to apologize for stuff he did, because he had some kind of epiphany, I guess. Sorry I'm just to cynical to buy that at his age chances are he's not going to randomly do a 360 and want to make amends for his beyond jerkish behaviour. Dumping a blind guy at the side of a busy highway to show him how much he needs you is not the behaviour of someone who has epiphanies. I just couldn't buy into this especially after he then proceeded to go to the same blind guys house and rearrange all his furniture. Nope, sorry no epiphanies here.

The next "WTF?" moment was when Token the wonder guide dog managed to open a locked door so he could put himself to bed. I have no problem with him putting himself to bed we were told numerous times what an incredibly smart dog he was but really opening a locked door? Sorry can I just say opposable thumbs? And yes I actually went back and reread this scene just make sure I didn't miss something and no it did not indicate that the door was unlocked between when Howard locked it and when Token put himself to bed so yes I had a "WTF?" moment.