Time to saddle up and move on... 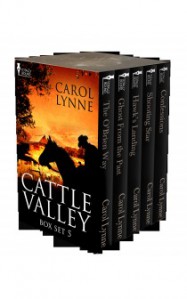 And thus ends my adventures in Cattle Valley. This is not a review of a book but the entire series. That would in fact be 30 books, mind you very few of them exceeded even 150 pages. Carol Lynne's Cattle Valley series reads like a soap opera a tale of who's zooming who, if you will. More graphic in detail definitely, absolutely filled with some interesting characters and food fetishes. I will never view corn on the cob and cotton candy the same again after this and might I just say I don't care who tries to tell me differently Chili and cinnamon buns are not a delicious combination they are in fact a guaranteed recipe for heartburn, acid reflux and major indigestion.

I loved the fact that the characters floated from story to story and for the most part no one really disappeared. Some of these stories could probably be read as a stand alone, however, because of the way they overlap I would strongly recommend against it.

The author has written these stories over the course of about 6 years from what I understand and while I've checked the series out from time to time I kept putting off reading them and normally 30 books into a series I would just take a pass on reading it. But given the brevity of the stories and a purchase inducing code from Kobo I decided to go for it.

For the most part I liked the characters and the variety of personalities Ms Lynne introduced. There were couples (m/m), there were menages (m/m/m & m/m/f) and there were relationships that didn't work. The characters were real and flawed and made mistakes and had issues to deal with. People died, got married, had children and yet there was the unreality of Cattle Valley a wish if you will for a place where people can live and be true to who they are and not fear for their safety,honestly this was one of my favourite things about this series because it's a wish that I think many of us share for this world so it was nice to slip away and spend time in Ms Lynne's version of that wish.

Cattle Valley is not classic or epic literature so if that's what you are looking for, honestly you'll probably want to move on. If you like soap operas and sex doesn't bother you and yes there is sex, lots and lots of sex than check it out, you may enjoy this, I know I did. It had it's moments when I rolled my eyes and my brain screamed "Really? WTF? Why am I reading this?" but then I'd keep going and I'd laugh or find myself attached to a character that I needed to find out more about. There were parts that were probably only worthy of 1 star but other parts I would have probably given closer to 4. So while this review shows a 3 star rating that is my overall rating for the series and not for any one book in particular.