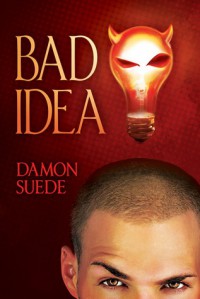 Comic books, we all read them when we were kids and some of us still read them. We watch the movies, we praise for the heroes and heroines. We revile the villains. We get a chance to escape our everyday humdrum lives. But what about the people who write them? Bad Idea is the story of one of those people, granted he is fictitious.

I liked the premise of this book. I grew up reading comics, my kids loves comics, manga, all things illustrated so this book grabbed my attention and then I started reading it. The first 60% felt like a forced read. I was finding the characters to be whiny and between the cliches and the alternate terms used for the male anatomy I was starting to think maybe I'd found a new drinking game. I considered tanking it and adding it to my rarely used DNF shelf, but I couldn't bring myself to do that. I hadn't reached the point of wanting to bleach my brain or play that drinking game so I decided to soldier on and finish the book.

It was the last 40% that redeemed the story and got me involved, especially the last 20 or 30 pages. a

In the end Bad Idea may not have been a great idea, but it turned out to be better than expected.