I still love Mary Calmes but... 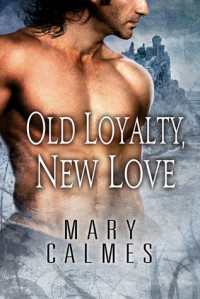 'Old Loyalty, New Love' will definitely not go down in history as one of my favourite Mary Calmes books. I enjoyed most of it but for me it just didn't quite make the grade.

The premise of this book sounded good and it's Mary Calmes so I was sure I would love it, but in the end things just didn't work out that way for me. I liked the MC's Roman & Quade. They were good together. Things started to fall apart when Quade's sister showed up and suddenly all was forgiven after years of never hearing from anyone after his father kicked him out for being gay and having to make his way in the world at a rather young age everything is forgiven and Quade is ready to save the day. Still I was willing to buy into this because...well, after all it's his sister and he's missed his family so I could see where there may have been an internal struggle,for Quade there was a stronger need to have that family connection back. But then it's suddenly the whole home town falling all over themselves and in spite of the rational (and there was one, but you'll need to read the book to find out) I just found it was a bigger dose of rainbow goodness than I could swallow.

And then the final thing that really, really irked me was...Quade's ex's...

Ex as in boyfriend and best friend. But especially the boyfriend. What a self centred, arrogant, conceited, selfish little shit. I don't care how pretty he was.

You don't cheat on your partner of 4 years with his best friend and expect that he's going to think this is wonderful when he walks in on you. And to top it all off he's just going to jump in bed with you and his best friend and all will be forgiven, NO JUST NO! Somebody please tell me in what universe can I conceive of this happening?

My other issue with this was the fact that Roman wanted Quade to fix things because it was "the right thing to do", sorry but in what universe. This was not Quade's problem to fix. It was Del's (the best friend) and it was Navon's but it sure as hell was not Quade's issue to resolve that his ex was a selfish, self-absorbed little douche; this was so not Quade's problem.

Ok so in case you didn't figure it out I really, really, REALLY! disliked Navon. So much so that part of me is still angry about him. Don't get me wrong I'm not upset that Mary Calmes created a character that I so blatantly hateD, if anything I'm rather impressed by that. I'm not even mad that she took the story in the direction she did. It's her story to tell. I'm more frustrated and disappointed that it was a direction I just couldn't follow. I love her stories and I can happily slip into her worlds and follow along without flinching. I adore Jin  & Logan, Sam & Jory, Stefan & Rand and on and on. I even really liked Roman & Quade.

But this scene was just more than I could swallow and I fell out of this story with a hard thud and landed soundly on my behind. Instead of being left with that warm melted happy feeling that a Mary Calmes story leaves me with. But at the end of it all, 1 miss does not a non-believer make and I will be back for more Mary Calmes comfort food.