Once upon a time on a beautiful old church... 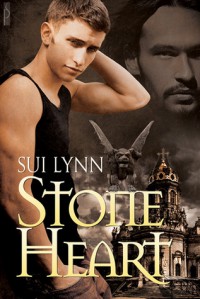 there lived four gargoyles and their names were Draco, Snout, Cullen and Bob (stop laughing I didn't name the poor thing. Justin did).  Now potentially Bob had some self esteem issues, ok I'm guessing here, but, really if you're a gargoyle named Bob is this a big stretch? I'm thinking not so much.

All right that's enough about Bob. Stone Heart was a fun read, it was definitely different and it had a lot going on as well as our gargoyles, we have Justin who is the owner of the church and his sister Tracy, her son Alex, her husband Tom, I think that was his name. Oh who cares he was an adulterous dirtbag and didn't stay around past the first couple of chapters anyways. Then there's David, yeah that's right every story needs a crazy, psycho stalker dude, oops I almost forgot Lucas, he's a security expert and Justin's best friend who lost touch with him when he enlisted and may be relevant to the whole Tracy/Alex/Tom issue. But you have to read the book if you want to know more about that.

Stone Heart was not a story that you read looking for any amount of reality, I mean really live gargoyles? Come on if that resembles reality then...man you need to lay off the meds. But it was fun and it had some sweet moments. My biggest gripe was it was too short and I try really hard not to use this complaint because I honestly feel that for the most part if it's a really good story that the reader enjoys...well, aren't they all too short? But I do think this story had enough going on that it would have actually benefited from a little more detail instead of the time jumps that it took of a month or two here and there. Still over all at the end of the book I was left smiling and wondering if maybe we should all start talking to the gargoyles...who knows what could happen?

Oopsie, I forgot to mention if anyone sees a dragon wondering around could you send him home. Seems he snuck down off of his parapet when I wasn't looking.